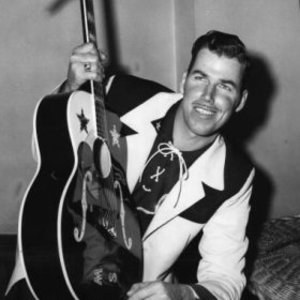 Slim Whitman (born January 20, 1924 in Tampa, Florida) is an American country music singer and songwriter. Self-taught on the guitar, Otis Whitman worked at a shipyard in Tampa while developing a musical career, eventually performing with a band known as the "Variety Rhythm Boys". Whitman's first big break came when agent Colonel Tom Parker heard him singing on the radio and offered to represent him.

Signed with RCA Records, he was billed as the cowboy singer, "Slim Whitman" and released his first 45rpm single in 1948. He toured and sang at a variety of venues including on the popular radio show, the Louisiana Hayride.

He only became a full time musician in the early 1950s after he recorded a version of the Bob Nolan hit Love Song Of The Waterfall that made it into the country music Top 10 chart. His next single, Indian Love Call, was even more successful, going to the No.2 position (and actually saving the world in the 1996 movie Mars Attacks! where it proves fatal to the invading Martians). A yodeler, Whitman avoided the "down on yer luck-buried in booze" songs, preferring instead to sing laid-back romantic melodies about simple life and love.

In 1955, in the United Kingdom, he had a No.1 hit on the pop music charts with Rose Marie. With eleven weeks at the top of the charts, the song set a record that lasted for thirty-six years. Soon after recording this big hit Whitman was invited to join the Grand Ole Opry and in 1957, along with other musical stars, he appeared in the film musical, Jamboree. Despite this type of exposure, he never achieved the level of stardom in the United States that he did in Britain where he had a number of hits during the 1950s and 60s. Throughout the early 1970s, he continued to record and was a guest on Wolfman Jack's musical television show, The Midnight Special. At the time, Whitman's recording efforts were yielding only minor hits and in 1974 he stopped making new records.

Added 01: Slim Whitman had actually recorded in Afrikaans for Afrikaners. I am actually listening to "Fluisterende Hoop" by Slim in Afrikaans as I write this.