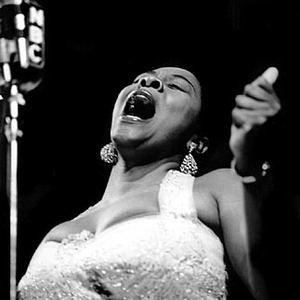 Ruth Lee Jones (born August 29, 1924 in Tuscaloosa, Alabama; died December 14, 1963 in Detroit, Michigan), better known by her stage name Dinah Washington and also as the Queen of the Blues, was an American Grammy award winning blues, jazz and rhythm and blues singer best known for singing classic torch songs and her hit single What A Diff'rence A Day Makes. Her penetrating voice, excellent timing, and crystal-clear enunciation added her own distinctive style to every piece she undertook.

While making extraordinary recordings in jazz, blues, rhythm and blues and light pop contexts, Washington refused to record gospel music despite her obvious talent in singing it, as she believed it wrong to mix the secular and spiritual.

Washington was born Ruth Jones in Tuscaloosa, Alabama. As she was growing up in Chicago, she played piano and directed her church choir. Later, she studied in Walter Dyett's renowned music program at DuSable High School. For a while, she split her time between performing in clubs as Dinah Washington while singing and playing piano in Salle Martin's gospel choir as Ruth Jones.

Washington began performing in 1942 and soon joined Lionel Hampton's band. In 1943, she began recording for Keynote Records and released "Evil Gal Blues", her first hit. By 1955, she had released numerous hit songs on the R&B charts, including "Baby, Get Lost", "Trouble In Mind", "You Don't Know What Love Is" (arranged by Quincy Jones), and a cover of "Cold, Cold Heart" by Hank Williams. In 1958 she made a well-received appearance at the Newport Jazz Festival.

With "What A Diff'rence A Day Makes" 1959, Washington won a Grammy Award for Best rhythm and blues Performance; the song was her biggest hit, reaching #8 on the Billboard Hot 100. The commercially driven album of the same name, with its heavily reliance on strings and wordless choruses, was slammed by jazz and blues critics as being far too commercial, not keeping with her blues roots. Despite this, the album was a huge success and Washington continued to favor more commercial, pop-oriented songs rather than traditional blues and jazz songs. She also dealt in torch songs; her rendition of The Platters' "Smoke Gets in Your Eyes" was well-regarded.

She was married seven times, and divorced six times while having several lovers, including Quincy Jones, her young arranger. She was known to be imperious and demanding in real life, but audiences loved her. In London she once declared, "...there is only one heaven, one earth and one queen...Queen Elizabeth is an impostor", but the crowd loved it.

Dinah Washington died from an accidental overdose of diet pills and alcohol at the age of 39 in 1963.

The Very Best Of CD3

The Very Best Of CD2

The Very Best Of CD1

What A Difference A Day Makes