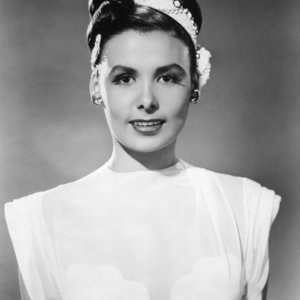 Lena Mary Calhoun Horne (June 30, 1917 ? May 9, 2010) was an American singer, actress, civil rights activist and dancer. She was born in Brooklyn, New York. She had recorded and performed extensively, both independently, and with other jazz notables, including Artie Shaw, Teddy Wilson, Billy Strayhorn, Duke Ellington, Charlie Barnet, Benny Carter, and Billy Eckstine. In her biography she stated that on the day she was born, her father was in the midst of a card game trying to get money to pay the hospital costs.

In her biography she stated that on the day she was born, her father was in the midst of a card game trying to get money to pay the hospital costs. Her parents divorced while she was still a toddler. Her mother left later in order to find work as an actress and Lena was left in the care of her grandparents. When she was seven her mother returned and the two traveled around the state, which meant that Lena was enrolled in numerous schools (for a time she also attended schools in Florida, Georgia and Ohio). Later she returned to Brooklyn.

She quit school when she was 14 and got her first stage job at 16, dancing and later singing at the famed Cotton Club in Harlem (a renowned theatre in which black performers played before white audiences, immortalized in the film - The Cotton Club (1984)). She was in good hands at the club, especially when people such as Cab Calloway and Duke Ellington took her under their wings and helped her over the rough spots.

Before long her talent resulted in her playing before packed houses. If she had never made a film, her music career would have been enough to have ensured her legendary status in the entertainment industry, but films were icing on the cake. After she made an appearances on Broadway, Hollywood came calling.

At 21 years of age Lena made her first film, The Duke Is Tops (1938). It would be four more years before she appeared in another, Panama Hattie (1942), playing a singer in a nightclub. By now Lena had signed with MGM but, unfortunately for her, the pictures were shot so that her scenes could be cut out when they were shown in the South, since most theatres in the South refused to show films that portrayed blacks in anything other than subservient roles to whites, and most film studios did not want to take a chance on losing that particular source of revenue. Lena did not want to appear in those kinds of stereotyped roles (and who could blame her?).

In 1943 MGM loaned her to 20th Century-Fox to play the role of Selina Rogers in the all-black musical Stormy Weather (1943), which did extremely well at the box-office. Her rendition of the title song became a major hit on the musical charts. In 1943 she appeared in Cabin in the Sky (1943), regarded by many as one of the finest performances of her career. She played Georgia Brown opposite Ethel Waters and Eddie 'Rochester' Anderson in the all-black production. Rumours were rampant that she and Waters just did not get along well, although there was never any mention of the source of the alleged friction. That was not the only feud on that picture, however. Other cast members sniped at one another and it was a wonder the film was made at all. Regardless of the hostilities, the film was released to very good reviews from the ever tough critics. It went a long way in showing the depth of the talent that existed among black performers in Hollywood - especially Lena's.

Lena's musical career flourished, but her film career stagnated. Minor roles in films such as Boogie-Woogie Dream (1944), Words and Music (1948) and Mantan Messes Up (1946) did little to advance her film career, due mainly to the ingrained racist attitudes of the time (even at the height of Lena's musical career, she was often denied rooms at the very hotels in which she performed, because they would not let blacks stay there).

After Meet Me in Las Vegas (1956), Lena left films to concentrate on music and the stage. She returned in 1969, as Claire Quintana in Death of a Gunfighter (1969). Nine years later she returned to the screen again in the all-black musical The Wiz (1978), where she played Glinda the Good Witch. Although that was her last big-screen appearance, she stayed busy in television, appearing in "A Century of Women" (1994) and That's Entertainment! III (1994).

After leaving Hollywood in the1950's, Lena Horne established herself as one of the premi?re nightclub performers of the post-war era. She headlined at clubs and hotels throughout the US, Canada and Europe, including the Sands Hotel in Las Vegas, the Cocoanut Grove in Los Angeles and the Waldorf-Astoria in New York. In 1957, a live album, entitled Lena Horne at the Waldorf-Astoria (At the Waldorf Astoria / At the Sands), became the largest selling record by a female artist in the history of the RCA-Victor label.

From the late 1950s through the 1960s, Horne was a staple of TV variety shows, appearing multiple times on Perry Como's Kraft Music Hall, Ed Sullivan, The Dean Martin Show and The Bell Telephone Hour. Other programs included, The Judy Garland Show, The Hollywood Palace and The Andy Williams Show. Besides two television specials for the BBC (later syndicated in the US), Horne starred in her own US television special in 1969, Monsanto Night Presents Lena Horne. In 1970, she co-starred with Harry Belafonte in the hour long "Harry & Lena" for ABC; in 1973, she co-starred with Tony Bennett in "Tony and Lena." Horne and Bennett subsequently toured the US and UK in a show together. A very memorable appearance was in the 1976 program "America Salutes Richard Rodgers," where she sang a lengthy medley of Rodgers songs with Peggy Lee and Vic Damone. Horne also made several appearances on The Flip Wilson Show.

Additionally, Horne played herself on television programs as The Muppet Show, Sesame Street, and Sanford and Son in the 1970s, as well as a 1985 performance on The Cosby Show and a 1993 appearance on A Different World.

In the summer of 1980, Lena Horne, 63 years old and intent on retiring from show business, embarked on a two month series of benefit concerts sponsored by Delta Sigma Theta. These concerts were represented as Horne's farewell tour, yet her retirement lasted less than a year.

In May 1981, The Nederlander Organization booked Lena Horne for a four week engagement at the newly named Nederlander Theatre (formerly the Trafalgar, the Billy Rose and the National) on West 41st Street in New York City. The show was an instant success and was extended to a full year run, garnering Horne a special Tony award, and two Grammy Awards for the cast recording of her show Lena Horne: The Lady and Her Music. The 333 performance Broadway run closed on Horne's 65 birthday, June 30, 1982. Later that same week, the entire show was performed again and video taped for television broadcast and home video release. The tour began a few days later at Tanglewood (MA) during the 1982 July 4 weekend. "The Lady and Her Music" toured 41 cities in the U.S and Canada through June 17, 1984. It played in London for a month in August and ended its run in Stockholm, Sweden, September 14, 1984.

In 1958, Horne was nominated for a Tony Award for "Best Actress in a Musical" (for her part in the "Calypso" musical Jamaica) In 1981 she received a Special Tony Award for her one-woman show, Lena Horne: The Lady and Her Music. Despite the show's considerable success (Horne still holds the record for the longest-running solo performance in Broadway history), she did not capitalize on the renewed interest in her career by undertaking many new musical projects. A proposed 1983 joint recording project between Horne and Frank Sinatra (to be produced by Quincy Jones) was ultimately abandoned, and her sole studio recording of the decade was 1988's The Men In My Life, featuring duets with Sammy Davis, Jr. and Joe Williams. In 1989, she received the Grammy Lifetime Achievement Award.

The 1990s found Horne considerably more active in the recording studio - all the more remarkable considering she was approaching her 80th year. Following her 1993 performance at a tribute to the musical legacy of her good friend Billy Strayhorn (Duke Ellington's long-time pianist and arranger), she decided to record an album composed largely of Strayhorn's and Ellington's songs the following year, We'll Be Together Again. To coincide with the release of the album, Horne made what would be her final concert performances at New York's Supper Club and Carnegie Hall. That same year, Horne also lent her vocals to a recording of "Embraceable You" on Sinatra's "Duets II" album. Though the album was largely derided by critics, the Sinatra-Horne pairing was generally regarded as its highlight. In 1995, a "live" album capturing her Supper Club performance (Live At The Supper Club) was released and subsequently won a Grammy Award for Best Jazz Vocal Album. In 1998, at the age of 81, Horne released another studio album, entitled Being Myself. Thereafter, Horne essentially retired from performing and largely retreated from public view, though she did return to the recording studio in 2000 to contribute vocal tracks on Simon Rattle's Classic Ellington album.

Had it not been for the prevailing racial attitudes during the time when Lena was just starting her career, her success might have been much bigger, and come much sooner. Even taking those factors into account, Lena Horne was one of the most respected, talented and beautiful performers of all time. She lived in New York City until her death in May of 2010.

Seasons of a Life

At The Waldorf Astoria & At The Sands

Live At The Supper Club