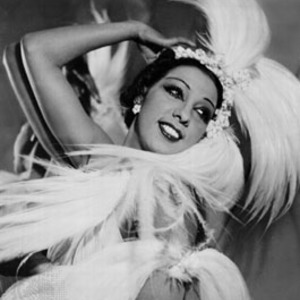 Josephine Baker (June 3, 1906 - April 12, 1975), born Freda Josephine McDonald, was an American-French dancer, actress and singer, sometimes known as "The Black Venus". Although born American, she became a French citizen in 1937. Early life Born in St. Louis, Missouri, the daughter of Carrie McDonald. Her father is identified as vaudeville drummer Eddie Carson by the official biography of her estate. She was of mixed ethnic background: Native American/African American. She descended from Apalachee Indians and Black slaves in South Carolina.

Born in St. Louis, Missouri, the daughter of Carrie McDonald. Her father is identified as vaudeville drummer Eddie Carson by the official biography of her estate. She was of mixed ethnic background: Native American/African American. She descended from Apalachee Indians and Black slaves in South Carolina.[4] She started her career as a busker, dancing in the street as a child. She entered vaudeville joining the St. Louis Chorus at 15. She then headed toward New York City during the Harlem Renaissance, performing at the Plantation Club and in the chorus of the popular Broadway revues Shuffle Along (1921) and The Chocolate Dandies (1924). She performed as the last dancer in a chorus line, a position in which the dancer traditionally performed in a comic manner, as if they were unable to remember the dance, until the encore, at which point they would not only perform it correctly, but with additional complexity. Although she was later to claim that she went unnoticed in America, she was billed as "the highest-paid chorus girl in vaudeville."

On October 2, 1925, she opened in Paris at the Th??tre des Champs-?lys?es, where she became an instant success for her erotic dancing and for appearing practically nude on stage. After a successful tour of Europe, she reneged on her contract and returned to France to star at the Folies Berg?re, setting the standard for her future acts. She performed wearing only high heels and a skirt made of bananas; she was often accompanied by her pet leopard, Chiquita, who was adorned with a diamond collar. The leopard frequently escaped into the orchestra pit, where it terrorized the musicians, adding yet another element of excitement to the show.

After a short while she was the most successful American entertainer working in France?whereas in the U.S., she would have suffered from the racial prejudices common to the era. Ernest Hemingway called her "the most sensational woman anyone ever saw." In addition to being a musical star, Baker also starred in several successful films, among them Zouzou (1934) and Princesse Tamtam (1935).

Upon marrying her manager Giuseppe Pepito Abatino?a Sicilian stonemason who passed himself off successfully as a Sicilian count?Baker transformed her stage and public persona into a sophisticated cultural figure. (The marriage was reportedly a publicity stunt and not legally binding.)

She was so well-known and popular that even the Nazis, who occupied France during World War II were hesitant to cause her harm. In turn, this allowed Baker to show her loyalty to her adopted country by participating in the Underground. After the war, Baker was awarded the Croix de Guerre for her underground activity.

Yet despite her popularity in France, she was never really able to obtain the same reputation at home. Upon a visit to the United States in 1936, she starred in a failed version of the Ziegfeld Follies (being replaced by Gypsy Rose Lee later in the run); her personal life similarly suffered, and she went through six marriages, some legal, some not. During this time, when Baker returned to the United States, she was allegedly at a dinner party and began to speak in French as well as English with a French accent. An African-American maid was reputed to tell her, "Honey, you is full of shit. Speak the way yo' mouth was born". She had the woman fired.[citation needed]

In 1973, Josephine Baker opened at Carnegie Hall to a standing ovation. She wept openly onstage in response to the warm welcome.

Though based in France, she supported the American Civil Rights Movement during the 1950s, and protested racism in her own unique way, adopting twelve multi-ethnic orphans, whom she called her "Rainbow Tribe." She also integrated several places in the United States and worked with the NAACP.[citation needed] For some time she lived with all of her children and an enormous staff in a castle (Les Milandes in the Dordogne) in France. (Baker had only one child of her own, stillborn in 1941, an incident that precipitated an emergency hysterectomy.)

On tours of the United States, she refused to perform in segregated nightclubs, and her insistence on mixed audiences helped to integrate shows in Las Vegas, Nevada. Nevertheless, her career was on a downturn and she was near bankruptcy until she was bailed out and given an apartment by her close friend, Princess Grace of Monaco, another expatriate American living in Europe.

During her life, she was also a great figure of the French freemasonry,[citation needed] fighting for freedom, civil rights, equality and against racism in France and other countries.

On April 8, 1975, her fortunes seemed to be turning to the better when she was the star of a retrospective show at Club Bobino in Paris, Jos?phine, celebrating her fifty years in the theater. The show opened to rave reviews. She died of a cerebral hemorrhage less than a week later at the age of 68 and was cremated. She was found lying peacefully in her bed surrounded by newspapers with glowing reviews of her performance.

She became the first American-born woman to receive French military honors at her funeral, which was held at L'?glise de la Madeleine. Paris came to a standstill on the day of her funeral and 20,000 filled the streets to watch her procession. She was interred at the Cimeti?re de Monaco. "Place Josephine Baker" in the Montparnasse Quarter of Paris was named in her honor. She has also been inducted into the St. Louis Walk of Fame.

There is also some speculation that Josephine Baker was bisexual. Most notably Josephine was linked with Mexican cultural surrealist Frida Kahlo, who was married to Communist revolutionary artist Diego Rivera. Some believe that one of the lesbian lovers depicted in the film Frida, a simple yet provocative shot of a beautiful black lounge songstress in France, is a portrayal of Baker.

Baker wrote several autobiographies, each containing a different story about her family and career.