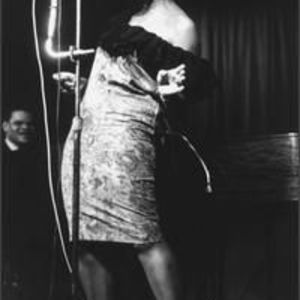 Betty Carter (1929?1998) was a prominent U.S. jazz singer, renowned for her improvisational technique and idiosyncratic vocal style. Carter expanded the role of the vocalist in jazz, to a full, improvising member of the band. Although her voice was not as admired by the public as such vocalists as Sarah Vaughan or Ella Fitzgerald, many consider her to have exercised mastery of the human voice previously unheard in jazz. Carmen McRae once claimed that "there's really only one jazz singer - only one: Betty Carter."

Carter was born Lillie Mae Jones on 16th May 1929 in Flint, Michigan and grew up in Detroit, where her father led a church choir. She studied piano at the Detroit Conservatory. She won a talent contest and became a regular on the local club circuit, singing and playing piano. When she was sixteen, she sang with Charlie Parker. She later performed with Dizzy Gillespie and Miles Davis and toured with Lionel Hampton (from whom she received the nickname "Betty Bebop"), when she perfected her scat singing of bebop.

Her career was eclipsed somewhat during the 1960s and 1970s, though a series of duets with Ray Charles in 1961, including the R&B-chart-topping "Baby, It's Cold Outside", brought her a measure of popular recognition. She recorded for various labels during this period, including Peacock, ABC-Paramount, and Atco, but was rarely satisfied with the resulting product. An episode in which a record company A&R man tried to abscond with a set of her master recordings led her to establish her own record label, Bet-Car, in 1970. Some of her most outstanding recordings were first issued on Bet-Car, including the double album The Audience with Betty Carter (1980). She was well-received at the Newport Jazz Festival in 1977 and 1978. In 1987 Carter signed with Verve Records. She won a Grammy in 1988 for her album Look What I Got! and sang in a guest appearance on The Cosby Show in that year.

I'm Yours, You're Mine

Look What I Got!