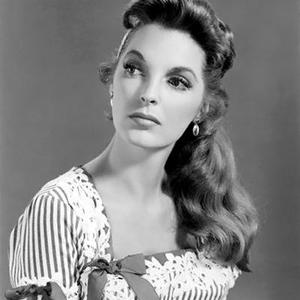 Julie London (1926? 2000) was a U.S. singer and actress known for her smoky, sensual voice, and for her role as Nurse Dixie McCall RN in the television series Emergency! (1972?1977). Born on 26th September 1926 in Santa Rosa, California, as Gayle Peck, she was the daughter of Jack and Josephine Peck, who were a vaudeville song-and-dance team. When she was fourteen the family moved to Los Angeles. Shortly after that, she began appearing in movies. She graduated from the Hollywood Professional High School in 1945.

Born on 26th September 1926 in Santa Rosa, California, as Gayle Peck, she was the daughter of Jack and Josephine Peck, who were a vaudeville song-and-dance team. When she was fourteen the family moved to Los Angeles. Shortly after that, she began appearing in movies. She graduated from the Hollywood Professional High School in 1945.

She was married to Jack Webb of Dragnet fame. Her obvious beauty and self-poise (she was a pinup girl prized by GIs during World War II) contrasted with his pedestrian appearance and stiff-as-a-board acting technique (much parodied by impersonators). This unlikely pairing arose from his and her love for jazz; their marriage lasted from July 1947 to November 1953. They had two daughters, one who was killed in a traffic accident in the 1990s and one who survived London. In 1954, having become somewhat reclusive after her divorce from Jack Webb, she met jazz composer and musician Bobby Troup at a club on La Brea Blvd. They married on December 31, 1959 and remained married until Troup's death in February 1999. Together, they had one daughter and twin sons.

London suffered a stroke in 1995, and was in poor health until her death in Encino, California, at the age of seventy-four, survived by four of her five children. She died on18th October 2000, and was buried in Forest Lawn - Hollywood Hills Cemetery in Los Angeles.

London began singing in public in her teens before appearing in film. She was discovered by Sue Carol (wife of Alan Ladd) while working as an elevator operator. Her early film career did not include any singing roles.

She recorded thirty-two albums in a career that began in 1955 with a live performance at the 881 Club in Los Angeles. She was named by Billboard the most popular female vocalist for 1955, 1956, and 1957. In 1957, she was the subject of a Life cover article in which she was quoted as saying, "It's only a thimbleful of a voice, and I have to use it close to the microphone. But it is a kind of oversmoked voice, and it automatically sounds intimate."

One of her most famous singles, Cry Me a River, was written by her high school classmate Arthur Hamilton, and produced by her husband Troup. The song was featured in the 1956 film The Girl Can't Help It. This became a million-selling single after release in April 1957 and could still sell on re-issue in April 1983 on the back of attention brought by the Mari Wilson cover version. The song has gained recent attention after being featured in the films Passion of Mind (2000) and V for Vendetta (2006). Other hit singles include Makin' Whoopee, Blue Moon, and It Had to Be You. Songs such as Go Slow epitomized her career style: her voice is slow, smoky, and sensual. The lyrics strongly suggest sex but never explicitly define it:

Her whispered "you make me feel so good" at the end is breathy and suggests a sexually satisfied partner, serving as later inspiration for Frank Sinatra's lyrically similar song.

The song Yummy, Yummy, Yummy was featured on the HBO series Six Feet Under, and appears on the series soundtrack album.

Her last recording was of the standard My Funny Valentine for the soundtrack of the 1981 Burt Reynolds film Sharky's Machine.

Sings The Choicest Of Cole Porter