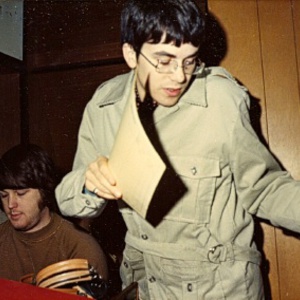 Van Dyke Parks (born January 3, 1943) is an American composer, arranger, producer, and musician, noted for his collaborations with Brian Wilson of The Beach Boys on the legendary album "SMiLE." As a child Parks acted in the 1956 movie The Swan, which starred Grace Kelly. He also worked steadily on television as a child actor between 1953 and 1958, including a role as Ezio Pinza's son on the NBC television show Bonino, as well as a recurring role as Little Tommy Manacotti (the kid from upstairs) on Jackie Gleason's The Honeymooners.

As a child Parks acted in the 1956 movie The Swan, which starred Grace Kelly. He also worked steadily on television as a child actor between 1953 and 1958, including a role as Ezio Pinza's son on the NBC television show Bonino, as well as a recurring role as Little Tommy Manacotti (the kid from upstairs) on Jackie Gleason's The Honeymooners. Early on, Parks also played in the folk group, The Greenwood County Singers with his brother, Carson Parks. After relocating to Los Angeles, Parks then worked as a studio musician and songwriter for Warner Brothers, writing hits for many artists such as Harpers Bizarre ("High Coin"); he became known for his clever lyrical wordplay and sharp imagery. He also played on several important recordings by The Byrds, whose producer Terry Melcher was a close friend of Beach Boys leader Brian Wilson, and this connection led to the meeting of Parks and Wilson in 1965.

In 1966 Parks was commissioned by Wilson to write lyrics for the Beach Boys' next LP, the ambitious but ill-fated Smile project. Parks and Wilson collaborated on the songs for the album. Unfortunately, the Smile project was strongly opposed by members of the Beach Boys (notably Mike Love who negatively called Parks' lyrics "Acid Alliteration"). The combination of resistance from the group and their record company, and Wilson's growing mental health problems and spiralling drug use, led to Parks quitting the project in early 1967 and it was shelved a few months later. Several Wilson/Parks songs from the Smile sessions later appeared on the Beach Boys' replacement album Smiley Smile, including "Heroes and Villains" and "Wind Chimes"; several other songs slated for Smile, including Cabinessence and Surf's Up, were compiled by Carl Wilson and included on subsequent LPs.

Smile soon acquired legendary status as one of the great lost works of the rock era. In 2004 Brian Wilson, now recovered from his mental health problems and having returned to touring and recording, made the surprise announcement that he was finally going to re-record the work using his current touring band. He contacted Parks, the duo finished the uncompleted parts of the album, and it was then recorded by Wilson and his band and released to enormous critical acclaim, earning Wilson a Grammy award for the Best Rock Instrumental Performance for the piece "Mrs O'Leary's Cow" (aka "Fire").

Four years later, Parks' many travels to the West Indies inspired his second album, Discover America. Among other things, Discover America was a rich tribute to the islands of Trinidad and Tobago and the native Calypso music. Van Dyke Parks was clearly at home re-arranging and re-producing obscure songs and calypso classics. The laid-back tropical feel of the songs and production made Discover America a fan favorite. This direction was continued in the 1976 release Clang of the Yankee Reaper.

Parks' 1984 album Jump! featured songs centered around the tales of Uncle Remus and Brer Rabbit. Jump! solidified Parks' reputation as a pop songwriter with a sophisticated yet innocent sensibility. Production on the album was highly polished and the sound was focused and cohesive.

Following Jump!, in 1989 Van Dyke Parks released the ambitious Tokyo Rose. The album tells tales of Japan and U.S. relations in the early part of the 20th century. Growing from the "children's song" feel of Jump, Tokyo Rose was an orchestral album with more mature subject matter. The songs were pop tunes with the signature Van Dyke Parks chord changes and mind-bending melodies. His earlier-developed sound of orchestra meets pop song meets female background vocal choir continued to develop on Tokyo Rose. The sound was lush and orchestral and took the listener on a journey from old Tokyo to the Wild Wild west on fan-favorites such as "Tokyo Rose", "Cowboy", "Manzanar" and "White Chrysanthemum".

In 1995 Parks teamed up again with Brian Wilson, this time to create the album Orange Crate Art. Parks wrote all of the songs on the album, save "This Town Goes Down At Sunset" and George Gershwin instrumental "Lullaby", and the vocals were done by Brian Wilson. Orange Crate Art is a harmonic tribute to the Southern California of the early 1900s, and a lyrical tribute to the beauty of Northern California. The songs are rich and lavishly orchestrated by Parks.

1998 saw the release of Parks first live album, Moonlighting: Live at the Ash Grove, and showed a love of the work of nineteenth century American pianist Louis Moreau Gottschalk.

In an Interview with Bandoppler magazine, Parks has announced his intention to release a new solo CD this year (2006). He is also collaborating with psych-folk icon Joanna Newsom on the orchestral arrangements for her much-anticipated sophomore album, also due in 2006. He and David Mansfield are co-credited with the music for the 2006 mini-series Broken Trail.

Parks has also scored a number of motion pictures, including Jack Nicholson's The Two Jakes, Casual Sex, Private Parts, Popeye (with Harry Nilsson ), and The Company. Disney also hired Parks to arrange Terry Gilkyson's Academy Award nominated song "The Bare Necessities" for the 1967 feature The Jungle Book. Parks had 4 songs featured in the 1986 direct-to-video Disney film, The Brave Little Toaster. He worked closely with David Newman on the film's score as well. In 1987 he also provided several complete songs for the direct-to-video Disney film The Brave Little Toaster Goes to Mars.

Though he has done so with far less frequency in recent years, Parks has occasionally taken small TV and film roles, including appearances in Popeye, The Two Jakes, and the Twin Peaks TV series.

Clang Of The Yankee Repear