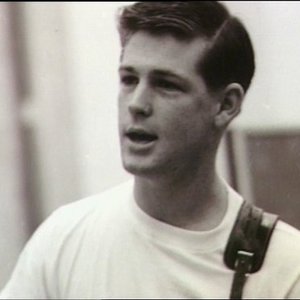 Brian Wilson is the chief songwriter and producer, co-lead vocalist, and former bassist of The Beach Boys. Due to his unorthodox approaches to pop composition, and arrangement, as well as his extraordinary mastery of the recording studio, he is widely acknowledged to be one of the most innovative and influential songwriters and producers ever in the pop idiom. The Beach Boys Brian Wilson formed The Beach Boys, originally the Pendletones, with Mike Love, Al Jardine, and his brothers Carl and Dennis, in 1961.

The Beach Boys
Brian Wilson formed The Beach Boys, originally the Pendletones, with Mike Love, Al Jardine, and his brothers Carl and Dennis, in 1961. The group initially found success as a novelty act of sorts, releasing a string of singles that related almost exclusively to California and surfing: "Surfin'," "Surfin' Safari," "Surfer Girl," "Surfin' USA," etc. By 1964, Wilson's ambition had reached a boiling point and he declined to tour with the rest of the group, instead focusing on his role as songwriter and arranger. A run of increasingly sophisticated releases followed, and in 1966 the Beach Boys released what is generally regarded as their magnum opus, a paean to the trials of adolescence and beyond entitled Pet Sounds.

Soon after, the Beach Boys released "Good Vibrations," which Wilson described as "a teenage symphony to God." The track was remarkable in its breadth and innovation - at the time, it was reportedly the most expensive track ever recorded. It moved quickly to #1. Around this time, Wilson began working on an even more ambitious work - to be titled Dumb Angel later renamed SMiLE - in collaboration with fellow composer and lyricist Van Dyke Parks. However, due to myriad obstacles - drug problems, resistance from his fellow bandmates, and a sharp decrease in confidence chief among them - the project became too much to handle, and Brian eventually withdrew. The results of these sessions, or at least some of the results, were scattered among subsequent releases. The unfinished album went on to be the stuff of legend for nearly 30 years.

After SMiLE
After the SMiLE debacle, Wilson more or less stopped writing material. The failure of the single "Break Away," released in 1969, pushed him over the brink, and he spent the next five years in a deep depression, abusing drugs and growing morbidly obese. The services of therapist Eugene Landy were enlisted in order to help Brian's ailing mind, and he did manage to help Wilson - it is arguable that he even saved him from what seemed inevitable death. However, as time went on, Landy's involvement stretched beyond simple therapy. He began exerting his influence on nearly every facet of Brian's life, from financial decisions to musical ones. After years of this, Landy was finally legally fired by Carl Wilson.

Solo Work
Brian Wilson has released eight solo albums. His first tentative step back into the world of recorded music was Brian Wilson, released in 1988. He was again quiet until 1995, when both I Just Wasn't Made for These Times, a collection of re-recordings seemingly meant to reintroduce him to the public, and Orange Crate Art, a song cycle written by Van Dyke Parks with contributions by Wilson, were released. An album of new compositions entitled Imagination followed in 1998, and Wilson began performing live again in 1999. His confidence onstage at a peak, he chose to release a live album documenting the Imagination tour (Live at the Roxy Theatre). In 2002 he began incorporating the whole of Pet Sounds into his set; this, too, was documented in a live album titled Pet Sounds Live. In 2004 Wilson began performing the entirety of SMiLE, theretofore an unfinished work, to great acclaim. That same year, he released Gettin' in Over My Head, featuring Elton John, Carl Wilson (posthumously), Paul McCartney, and Eric Clapton, and the completed SMiLE. Wilson released a collection of Christmas songs entitled What I Really Want for Christmas, in October of 2005.

Brian released his latest album That Lucky Old Sun on September 2, 2008 after returning to Capitol Records.

In The Key Of Disney