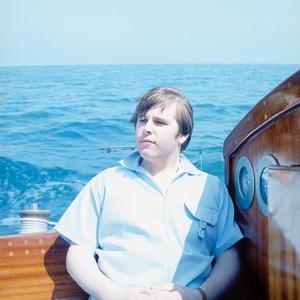 Carl Dean Wilson (December 21, 1946 ? February 6, 1998) was the youngest of the three brothers who made up the core of The Beach Boys. The band's lead guitarist, Wilson played the Chuck Berry-esque leads on many of their early hits. Because the band first became successful when he was in his teens, he was still developing as a musician and singer. His lead vocals in the band's first three years included "Summertime Blues" (duet with David Marks), "Louie, Louie" (splitting the lead with Mike Love), "Pom Pom Play Girl," "All Dressed Up For School", and "Girl Don't Tell Me".

The band's lead guitarist, Wilson played the Chuck Berry-esque leads on many of their early hits. Because the band first became successful when he was in his teens, he was still developing as a musician and singer. His lead vocals in the band's first three years included "Summertime Blues" (duet with David Marks), "Louie, Louie" (splitting the lead with Mike Love), "Pom Pom Play Girl," "All Dressed Up For School", and "Girl Don't Tell Me".

When the band started being augmented or replaced by session musicians on many of their mid-'60s recordings (they contributed the majority of the instrumental work themselves on the early-'60s recordings), Carl recorded his guitar leads during the Beach Boys vocal sessions, with his guitar plugged directly into the soundboard.

By the mid-1960s, he had become a far stronger vocalist and an accomplished live performer, and following his masterly lead on "God Only Knows", in 1966, was often featured as lead vocalist for the band (a role previously dominated by Mike Love and Brian Wilson), singing many leads on the Smiley Smile and Wild Honey albums, including the hit singles "Good Vibrations," "Darlin'," and "Wild Honey."

After his elder brother Brian's retirement from the stage in 1965, Carl became the de facto leader of the band onstage (contracts at that time reading that promoters hired 'Carl Wilson plus four other musicians'), and shortly after became the band's in-studio leader, producing the bulk of the albums 20/20, Sunflower, Surf's Up, Carl and the Passions - "So Tough" (named in honour of his effective leadership of the band at this point) and Holland.

In the late 1960s Wilson also made headlines as a conscientious objector to the Vietnam War, at one point having to let the rest of the band tour the UK without him while he was up before the draft board.

Never a prolific songwriter, Wilson's first solo composing contributions to the band, other than a handful of early surf instrumentals, came with 1971's Surf's Up, on which he composed "Long Promised Road" and "Feel Flows" to lyrics by the band's then manager Jack Rieley. He had earlier been given cowriting credits on a few songs, but these appear to have been for arrangement ideas contributed to others' songs - he considered "Long Promised Road" his first real song. On subsequent Beach Boys albums he would average one or two songs, co-written with various lyricists or other members of the band. He remained a prominent and recognizable voice in the band, taking lead vocals on many songs, including several written by his brother Dennis Wilson.

During the 1970s Wilson also produced records for several other artists, notably Ricci Martin (son of Dean Martin, not to be confused with the late-'90s pop star) and South African group The Flame (two members of whom went on to be members of the Beach Boys for a couple of years.

He also occasionally appeared on others' records as a backing vocalist, most notably appearing on Chicago's Wishing You Were Here (with brother Dennis and bandmate Al Jardine), Elton John's "Don't Let The Sun Go Down On Me" (with then former-bandmate Bruce Johnston) and Dave Lee Roth's hit cover of "California Girls."

By the early 1980s the Beach Boys were in disarray - the band had split into several camps. Frustrated with the band's sluggishness to record new material and reluctance to rehearse for live shows, Wilson took a leave of absence in 1981, rather than remain as part of what he saw increasingly becoming a nostalgia act.

He released a solo album, Carl Wilson, to little critical notice, in 1981, made up of songs co-written with Myrna Smith-Schilling (former backing vocalist for Elvis Presley and Aretha Franklin and wife of Wilson's then manager Jerry Schilling).

He recorded a second solo album, Youngblood, in a similar vein, but by the time it was released in 1983 he had already rejoined the Beach Boys, and some have suggested that the line "If I could talk to Love I'd say/'Have it your way, Love, have it your way'" in the song "If I Could Talk To Love" on that album might have been more about his bandmate(s) than the emotion.

He still remained an important part of the band as a performer, singing lead on the chorus to the band's last big success, 1988's US number one "Kokomo," but saved his songwriting and production for home recordings. He carried on touring with the band until the last months of his life.

Carl Wilson died in February 1998 of lung cancer, three months after the death of his mother Audree Wilson. He was survived by his brother Brian, wife Gina (daughter of Dean Martin), and two sons by his first marriage, Justyn and Jonah.

A handful of posthumous recordings of Wilson have been released - notably the album Like A Brother, by a 'supergroup' called Beckley-Lamm-Wilson Carl formed with Gerry Beckley of America and Robert Lamm of Chicago. He also appeared posthumously on his brother Brian's album Gettin' In Over My Head, which used his vocal from the unreleased Beach Boys song "Soul Searchin'" put to a new backing track. He also appears on the many Beach Boys archival releases that have come out since his death.

He is widely regarded to have had one of the finest voices in rock and his voice appears as a backing vocal on many recordings by groups and solo singers.

Too Early To Tell (Vinyl)