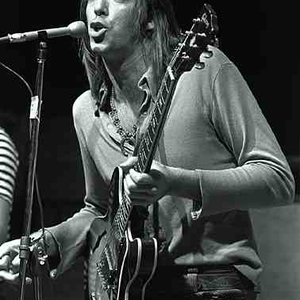 Boz Scaggs (born William Royce Scaggs, June 8, 1944) is an American singer, songwriter and guitarist. Scaggs was born in Canton, Ohio. After learning guitar at the age of 12, he met Steve Miller at St. Mark's School of Texas in Dallas. In 1959, he became the vocalist for Miller's band The Marksmen. The pair later attended the University of Wisconsin together, playing in blues bands like The Ardells and The Fabulous Knight Trains.

Leaving school, Scaggs briefly left Texas to join the burgeoning rhythm and blues scene in London. After singing in bands such as The Wigs and Mother Earth, he recorded his first solo album Boz in 1965, which was not a commercial success. He traveled to Sweden as a solo performer and did a brief stint with the band The Other Side with fellow American Jack Downing and Brit Mac MacLeod.

Returning to the US, Scaggs promptly headed for the booming psychedelic music center of San Francisco in 1967. Linking up with Steve Miller again, he appeared on the Steve Miller Band's first two albums Children of the Future and Sailor, which won over critical reviews. After being spotted by Rolling Stone publisher Jann Wenner, Scaggs secured a solo contract with Atlantic Records in 1968. Despite good reviews, his first Atlantic album was met with lukewarm sales, as were followup albums on Columbia Records. In 1976, he linked up with session musicians who would later form Toto and recorded his smash album Silk Degrees. The album reached number 2 on the US charts and number 1 in a number of countries across the world, spawning three hit singles: "Lowdown", "Lido Shuffle", and "What Can I Say", as well as the MOR standard "We're All Alone", later a hit for Rita Coolidge. A sellout world tour followed, but his follow-up album, the 1977 Down Two Then Left, lacked the cohesion of Silk Degrees. The 1980 album Middle Man would spawn two top 20 hits, "Breakdown Dead Ahead" and "Jojo," and Scaggs would enjoy two more hits over 1980 and 1981 ("Look What You've Done to Me" from the Urban Cowboy soundtrack, and "Miss Sun" from a greatest hits set). But Scaggs' lengthy hiatus from the music industry (his next LP, Other Roads, wouldn't appear until 1988) slowed his chart career down dramatically.

Scaggs has continued to record and tour sporadically throughout the 1980s and 1990s, although he has semi-retired from the music business and now owns the San Francisco nightclub Slim's.

Scaggs recorded Other Roads in the mid-1980s, took another hiatus and then came back with Some Change in 1994. He released Come On Home, an album of blues, and My Time, an anthology in the late 1990s. He garnered good reviews with Dig, although the CD, which was released on September 11, 2001, was lost in the post-911 mel?e. In May, 2003, Scaggs released But Beautiful, a collection of jazz standards that debuted at number 1 on the jazz charts.

He tours each summer, has a loyal cadre of fans, remains hugely popular in Japan, and released a DVD and a live CD in 2004.

At the end of the Family Guy episode Death is a Bitch, Death's present to Peter was "The Complete Boz Scaggs". A Mr. Show episode depicts eccentric entrepreneur Grass Valley Greg holding an impromptu concert by Boz Scaggs in the company cafeteria.

Out Of The Blues (Target Exclusive)

Out of the Blues

Unplugged At The Plant

A Fool To Care (Deluxe Edition)

A Fool to Care