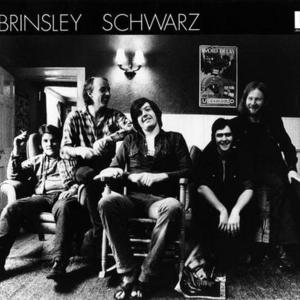 Brinsley Schwarz were a 1970s English pub rock band, named after their guitarist Brinsley Schwarz that merged a love of American-style country rock, soul, pop, and R&B and had a six year run with United Artists records. They had evolved into its most well-known form by 1969 after achieving some success as Kippington Lodge. Likely most notable for being the early 70s UK pub rock band that spawned the solo career of Nick Lowe, recording the tune "(What's So Funny About) Peace Love & Understanding" in 1974 several years before fan & former roadie Elvis Costello recorded it.

Likely most notable for being the early 70s UK pub rock band that spawned the solo career of Nick Lowe, recording the tune "(What's So Funny About) Peace Love & Understanding" in 1974 several years before fan & former roadie Elvis Costello recorded it. The group was popular in the UK and Euro territories, touring the UK in 1972 as an opening act for Paul McCartney & Wings, and playing the UK's regional pub & hall circuit with bands like Dave Edmunds, Atomic Rooster, Ducks Deluxe & Grateful Dead, even headlining the first Glastonbury festival. In addition to Schwarz, and Lowe on bass & vocals, the band featured American Billy Rankin on drums, and Bob Andrews on Hammond B-3 organ, with 2nd guitarist Ian Gomm added in 1970. Brinsley Schwarz signed a contract with manager Dave Robinson, who developed a plan to earn the band some publicity. They first played America on a fiscao laden press junket opening for Van Morrison at the Fillmore East in New York City in 1970 but were not well rested or well received and never toured the states again. Before breaking up in 1975, they released 12 albums and 21 singles for United Artists, and were the first band to play live in 1973 on the BBC's "Old Grey Whistle Test" programme and had a cameo in the film "Stardust" with David Essex.

In 1970, Brinsley Schwarz released Despite It All, which had a definite country sound to it, and later added Ian Gomm to the band. Their wild performances soon garnered the band a large fanbase on the London pub rock scene, at venues such as 'The Tally Ho' in Kentish Town. Along with other bands like Eggs Over Easy, Brinsley Schwarz was soon dubbed "pub rock" by rock journalists. They sounded, at times, very much like The Band, with Schwarz's guitar work influenced greatly by Robbie Robertson's.

1972's ironic take on country rock, Nervous on the Road, received excellent reviews but did not reach the charts; neither did a series of singles or Please Don't Ever Change (1973). They continued recording for a time, but broke up in 1975.

Lowe went on to greater acclaim than any other member, starting off as Stiff's in house producer he recorded the debut discs of Elvis Costello, The Damned & The Pogues, recorded several albums with Rockpile and had some late 70s solo hit singles. Lowe married Johnny Cash's step daughter Carlene Carter Cash for a spell in the 80's, and later made a million from the inclusion of Curtis Stigers' cover version of "(What's So Funny About) Peace Love & Understanding" on the multi-platinum soundtrack to Whitney Houston's film "The Bodyguard".

Gomm, once described in a 1971 NME issue as "the best guitarist in Britain" attempted a solo career, and later became a Welsh studio owner & record producer who worked with The Stranglers and Alexis Korner.

The original version of Elvis Costello's hit "(What's So Funny 'Bout) Peace, Love, and Understanding," written by Lowe, was released by the band in 1974 on their album The New Favourites of Brinsley Schwarz and also featured on the multi million selling soundtrack of the movie The Bodyguard, where it was performed by Curtis Stigers.

It's All Over Now

Cruel To Be Kind