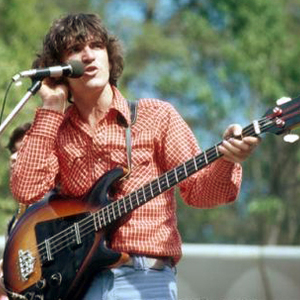 Richard Clare "Rick" Danko (December 29 1943 - December 10, 1999) (his birthdate is often mistakenly listed as 1942) was a musician and singer from Green's Corners, near Simcoe, Ontario, probably best known as the bass player and one of three lead singers of The Band. At the age of 14 (1957) Danko booked himself as an opening act for Ronnie Hawkins, & his band The Hawks. Hawkins asked Danko to join his band as a rythym guitarist, though later he would have Danko learn the bass, and by 1960 was Hawkins' bassist.

At the age of 14 (1957) Danko booked himself as an opening act for Ronnie Hawkins, & his band The Hawks. Hawkins asked Danko to join his band as a rythym guitarist, though later he would have Danko learn the bass, and by 1960 was Hawkins' bassist.

Around 1963 The Hawks broke away from Hawkins and the members (including Danko) would go on to continue as the Levon Helm Sextet (later renamed to The Canadian Squires and Levon And The Hawks).

In 1965, Bob Dylan recruited Levon and the Hawks to accompany him on his 1965/66 wold tour. However, Levon Helm chose not to tour with Dylan and was replaced on the tour by drummer Mickey Jones. In 1968, Danko and The Hawks, who had moved to Woodstock, where they began to be referred to as simply "the band," began recording with Dylan in the basement of a big pink house that Danko had rented (and which would soon become famous on its on as "Big Pink"). With Levon Helm back in the fold, they also released their first demo, allowing them to secure a record deal with Capitol Records. Working over the next few months, the five-piece band recorded what would become their debut album, Music From Big Pink. At this time, the group more or less officially changed their name from The Hawks to The Band, this time with a capital "B." Shortly after the album was released, Danko was seriously injured in a car crash, breaking his neck and back in nine places. Though he was laid up in traction for many weeks, he recovered and worked with The Band until 1976, when the group did their final concert at San Francisco's Winterland. The film of the concert, directed by Martin Scorsese, was released as "The Last Waltz" in 1978.

Danko would go on to record solo work on Arista Records, releasing his first solo work in 1977 (his self-titled debut). In the early 1990s, Danko teamed with Jonas Fjeld and Eric Andersen and three albums were released, Danko/Fjeld/Andersen in 1991, Ridin' on the Blinds in 1994, and One More Shot in 2001. Danko released a live album in 1997 (Rick Danko in Concert), and, in 1999, he released Live on Breeze Hill, which featured a new studio version of his much-loved song, "Sip the Wine" (the original version was on his first studio album) and was already working on material for his next work called Times Like These. On December 10, 1999, Danko's heart gave out and he passed away in his sleep. Times Like These was released posthumously the following year.