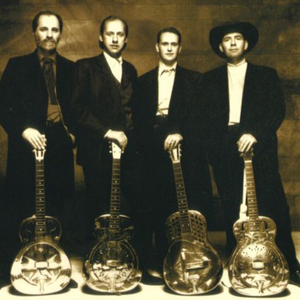 The Notting Hillbillies was a country music project formed in 1986 by Mark Knopfler, who was then lead guitarist and singer of the Dire Straits, with Brendan Croker, Steve Phillips, and Knopfler's bandmate Guy Fletcher. They made just one album, Missing...Presumed Having a Good Time. This album was released on Vertigo (Warner Bros. in the US) in 1990, before returning to concentrate on their primary musical outlets. The Notting Hillbillies have reunited several times for charity gigs. In May 1997 the Hillbillies went on an 11 show tour in the UK.

On 31 May 1986, Mark Knopfler played a low key gig at the Grove pub in Holbeck, Leeds, with old friends Steve Phillips and Brendan Croker. They were billed as the Notting Hillbillies and each received the princely sum of ?22 for their performance. Phillips first met Knopfler in 1968 when both interviewed a local blues and country guitarist (also called Steve Phillips) for the YORKSHIRE POST. As both journalists played guitar they formed the Duolian String Pickers duo and played together during the late '60s. They split when Knopfler went to university in 1970. When he finished studying three years later he went to London and eventually formed Dire Straits. Meanwhile, Phillips formed the Steve Phillips Juke Band to play rockabilly. In 1976 Bradford-born Croker met Phillips and when the Juke Band split they toured as Nev And Norriss. In 1980, Phillips temporarily retired from music to concentrate on art. Croker eventually got the 5 O'Clock Shadows together. In 1986 Knopfler, flushed with success through Dire Straits, decided the time was right to do something a little different. In 1989 they started to work on a album and all three musicians came together, Mark also called on Dire Straits cohort Guy Fletcher to play keyboards and subsequently to help with the production of the album "Missing......Presumed having a good time" released in 1990.

In 1993, the Notting Hillbillies performed two live shows, both without Guy Fletcher.

Missing... Presumed Having A Good Time