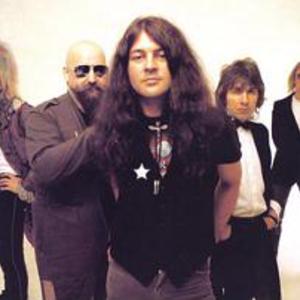 Gillan is a rock band closely associated with but not directly arising from the New Wave Of British Heavy Metal, formed in 1978 by Ian Gillan and Colin Towns in the UK. In 1978 Ian Gillan had become dissatisfied with the jazz fusion style of his band called Ian Gillan Band and dissolved it, retaining only keyboard player Colin Towns, and formed a new band entitled Gillan. He added Steve Byrd on guitar, Liam Glenocky on drums and John McCoy (ex-Zzebra) on bass...

In 1978 Ian Gillan had become dissatisfied with the jazz fusion style of his band called Ian Gillan Band and dissolved it, retaining only keyboard player Colin Towns, and formed a new band entitled Gillan. He added Steve Byrd on guitar, Liam Glenocky on drums and John McCoy (ex-Zzebra) on bass, and initially pursued a progressive rock direction, releasing their eponymous debut in 1978, although they could only get a record deal in Japan. This recording has subsequently become more widely available as The Japanese Album.

The album was sufficiently successful to attract more attention and in 1979 the band secured a European deal with Acrobat Records. Before a new album was recorded, Byrd was replaced by Bernie Torm? and Glenocky by Mick Underwood, Ian Gillan's former colleague in Episode Six. Torme's "screaming guitar" sound fundamentally altered the dynamics and Gillan took a heavy metal direction. This lineup's first album was released as Mr. Universe and contained many re-worked songs from The Japanese Album. The band caught the rise of the NWOBHM at just the right time and the group gained popularity in Europe. At Christmas Gillan turned down an offer from Ritchie Blackmore to join Rainbow, but Blackmore did make a "legendary" guest appearance for Gillan at their Christmas show. It was the first time Ian Gillan and Blackmore had performed together since 1973.

In 1980 Gillan reached the peak of their success, releasing the successful Glory Road album with the limited edition "free" LP For Gillan Fans Only. However the band remained unknown in North America and were unable to raise any interest there despite tours.

By 1981 the band members were becoming disgruntled that their European and Japanese success was not translating into increased pay, and after the Future Shock album tour, Torme walked out just before the band were due to appear on Top of the Pops. He was replaced by White Spirit guitarist Janick Gers and this line up releaed the live/studio combi double album Double Trouble at the end of the year. In 1982 final album Magic followed. By this time, tension over money had reached fever-pitch and Ian Gillan needed time to have nodes removed from his vocal chords. He also received and accepted an offer to replace Ronnie James Dio in Black Sabbath. After the Magic tour Ian Gillan dissolved the band to the incredulity of the other members, particularly McCoy, and the acrimony remained into the 21st century.

McCoy subsequently released compilations of studio out-takes to which he had the rights, beginning with Gillan Tapes, Vol. 1, and ensured that revenues were distributed fairly amongst the band.

Talisman: In The Studio & On Stage CD2

Talisman: In The Studio & On Stage CD1