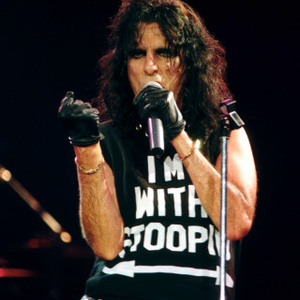 Alice Cooper (born Vincent Damon Furnier, February 4, 1948 in Detroit, Michigan) is a rock singer and musician whose career has lasted nearly five decades. He is often referred to as the founder of shock rock due to his gory, theatrical performances. Cooper's music influenced many musicians and helped shape the sound of punk rock and early heavy metal. The original Alice Cooper band played mostly garage rock with a shock rock image.

Since the beginning of Cooper's solo career in 1974, he has experimented with many different musical styles. These include art rock, hard rock, new wave, psychedelic rock, disco, hair metal and industrial metal. In recent years Cooper has returned to his garage rock roots.

The original Alice Cooper group started in March 1964 as The Earwigs, a The Beatles cover band. After a couple of name changes, they settled on Alice Cooper in 1968 and the group became known for their theatrical and shocking garage rock. The group wore heavy make-up and women's clothing on stage. They were one of the first shock rock bands, preceded only by Screamin' Jay Hawkins.

Alice Cooper was originally the name of the band. Under this name, they released several albums before the band dissolved and Vincent Furnier legally changed his name to Alice Cooper, thus making Alice a solo artist instead of a band.

It wasn't until the Alice Cooper band's 3rd album, Love It to Death, that the band started getting attention, mostly due to the single "Eighteen". Popularity rose with each subsequent release through to 1974, particularly with 1973's release of "Billion Dollar Babies".

The 1972 release of the School's Out album saw the band become the biggest selling rock band in the world. The single "School's Out" was a world wide anthem hit and reached number 1 in the UK.

1974 saw the last 'Alice the Band' release, Muscle of Love. It was during this year that Vincent changed his name to Alice. Alice would go on to release his first solo album, and most successful album to date, in 1975. The album was Welcome to My Nightmare. The stage show for this tour required four months of rehearsals before the tour actually started.

Battles with alcoholism would then lead to time spent in medical centers, as well as changes in his musical style. By 1980, Alice had gone from rock to doing albums that could only best be classified as new wave-influenced.

After over a decade of having a new release every year, the release streak would end in 1983 with the overlooked album DaDa. Alcoholism had taken its toll on Cooper, prompting his wife to file for divorce (they reconciled in 1984). Doctors stated he was severely malnourished and close to death, which led to further treatment for alcoholism. The treatment was successful and Alice remains sober to this day.

The 3 years following DaDa would be uneventful, as Alice made appearances rarely. It wasn't until '86 that he made a real return to music, this time with a much harder style that resulted in Constrictor, followed by similarly-styled Raise Your Fist and Yell in '87.

The two albums showed the world he was back, but on a very low level as rock radio was moving on to bands like Bon Jovi and Poison. This would change in 1989 when Alice released the multi-platinum album Trash, which rode hard on hit single "Poison" and other singles breaking the top 40.

He followed this up with the similarly-styled Hey Stoopid. Another 3 years would pass before his next release, The Last Temptation. The album saw him shed the "hair metal" sound of the previous 2 albums, providing a straight-forward rock album with a storyline that was adapted as a 3-part graphic novel series.

It took 6 years of regular touring, live releases, compilations, and a 4-disc box set for Alice to return to the studio. With yet another label change, Alice released his hardest rocking album to date in 2000, Brutal Planet, with the follow-up Dragontown having the same theme.

Not content to stick to one style for too long, Alice took another route after that with the stripped-down releases The Eyes of Alice Cooper in 2003 and Dirty Diamonds in 2005. For The Eyes, Alice insisted on one-take recordings for the songs, giving the album more of a garage rock sound. Dirty Diamonds was recorded similarly, though he allowed for more cleanup.

"Live in Montreux" was a DVD with an accompanying CD, included a full show from the Dirty Diamonds tour recorded in 2005.

Alice continues to do his international radio show "Nights With Alice Cooper", which airs every weeknight. He also does a daily radio show for British station "Planet Rock", "Breakfast With Alice", which runs from 6 am to 8 am.

Throughout his career, Alice has made numerous appearances on television and in theatrical releases. Television shows he has appeared in include That 70's Show, Space Ghost Coast to Coast , The Muppet Show, Pearl, Something Wilder, American Idol, and Hollywood Squares, among others. Alice also had acting roles in the movies Suck, Freakshow, Prince of Darkness, and many more. He starred in Alice Cooper: The Nightmare, a made-for-TV movie based on his first solo album, and Good to See You Again, Alice Cooper, a theatrically released film featuring footage from the Billion Dollar Babies concert tour.

2008 saw the release of Along Came A Spider, a concept album based on a fictional serial killer known as Spider. Cooper's first solo record is referenced within the album.

In 2009, Alice launched the Theatre of Death tour worldwide and continues to make frequent appearances in the media. A CD/DVD set was released in September 2010 featuring concert footage from the tour.

The original Alice Cooper band was inducted into the Rock and Roll Hall of Fame on March 14th, 2011.

Live From The Astroturf 2022

A Paranormal Evening At The Olympia Paris (Live At The L'olympia)

The Sound Of A