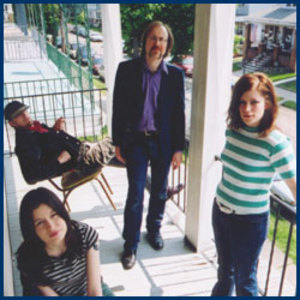 Named after a brilliant red hair dye, Detroit's Outrageous Cherry explores the sunnier side of droning, fuzzy indie rock. The band started as a recording project in 1992 but blossomed into a full-fledged group when singer/guitarist/producer Matthew Smith, bassist Chad Gilchrist, guitarist Larry Ray, and drummer Deb Agnolli began performing live in 1993. Outrageous Cherry's wistful noise-pop debuted with a limited-edition 7" of "Pale, Frail Lovely One" on the local Third Gear label.

The song's deceptively simple, garagey sound formed the template for the group's style: on albums like 1994's Outrageous Cherry and 1997's Nothing's Gonna Cheer You Up, Smith's and Ray's alternately jangly and feedback-laced guitars and Agnolli's minimalist, floor tom-and-snare drumming combine with sweet vocals for a sound that falls between nostalgic and experimental.

Along with his duties in Outrageous Cherry, Smith also performs in the country-tinged Volebeats and often collaborates with His Name Is Alive's Warren Defever on producing and recording projects, as does Gilchrist, doubling as Outrageous Cherry and His Name Is Alive's bassist. In 1999, Aran Ruth replaced Gilchrist on bass, and the group released its first album for Del-Fi's new music imprint, DF2K, Out There in the Dark. The group also contributed a version of "Keep Everything Under Your Hat" for that year's Skip Spence tribute, More Oar. The band moved to Alan McGee's new label, Poptones, for their next album, 2001's prog- and space rock-influenced The Book of Spectral Projections, which was reissued the following year by Rainbow Quartz. Outrageous Cherry stayed with that label for their two 2003 releases, Supernatural Equinox and the Stay Right Here for a Little While EP. Another EP, Why Don't We Talk About Something Else, arrived late in 2004, followed by the full-length Our Love Will Change the World in early 2005. The aptly named Stay Happy, which followed in the poppier vein of Our Love Will Change the World, arrived in fall 2006.

Meet You In The Shadows

Wide Awake In The Spirit World - The Best Of

Why Don't We Talk About Something Else (EP)

Our Love Will Change The World

Out There In The Dark

Nothing's Gonna Cheer You Up