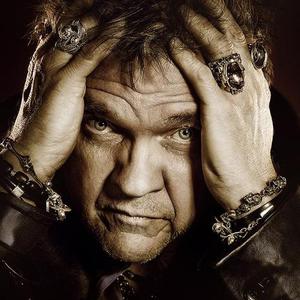 Meat Loaf (born Marvin Lee Aday on September 27, 1947 in Dallas, Texas) is an American actor and rock and roll performer who came to fame with his album Bat Out of Hell and for his movie performances, including Eddie in The Rocky Horror Picture Show, Robert "Bob" Paulson in Fight Club and Jack Black's father in Tenacious D in The Pick of Destiny. The All Of Me Songfacts reports that Meat Loaf described his 12th studio album, Hell in a Handbasket, to Billboard as, "the most personal record I've ever made.

The All Of Me Songfacts reports that Meat Loaf described his 12th studio album, Hell in a Handbasket, to Billboard as, "the most personal record I've ever made.? He added: ?It's about how I feel the world's gone to hell in a handbasket. It's really the first record that I've ever put out about how I feel about life and how I feel about what's going on at the moment." The LP was released September 30, 2011 in Australia, followed by a release in February and March 2012 worldwide.

Meat Loaf has had a very successful music career spawning some of the greatest selling albums of all time and breaking various records. Although he enjoyed success with Jim Steinman's Bat Out Of Hell Trilogy, he experienced some initial difficulty establishing a steady career within the United States; however, he is considered a legend in the UK and across Europe. In the UK, he is ranked 23rd for number of weeks in the charts overall. Due to his anthemic songs and a performance for Radio Veronica in the Netherlands, he stormed up their Top 100 of all times making a top 10 spot 6 years in a row. He ranks at 96th on VH1's "100 Greatest Artists of hard rock." His overall success in Europe and Australia has been exceptional and he is considered one of the top artists of all time.

Braver Than We Are (Deluxe Edition)

The Vow (Music from the Motion Picture)

Hell In A Handbasket

Piece Of The Action: The Best Of CD2

Piece Of The Action: The Best Of CD1