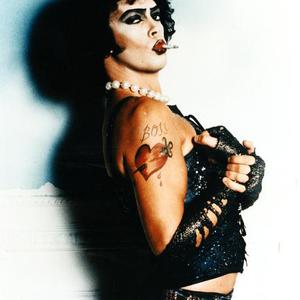 Timothy James Curry (born April 19, 1946 in Grappenhall, a district of Warrington, England) is an English actor, vocalist and composer perhaps best known for his role as mad scientist Dr. Frank N. Furter in The Rocky Horror Picture Show (1975). He also had a later career as a rock musician. He studied Drama and English at Birmingham and then at Cambridge. His list of roles is extremely extensive, in both TV and movies, live-action and voice-acting for animated features, and it is notable that he almost always plays a villain of one kind or another.

He currently resides in Los Angeles, though for the past year or so has been in Chicago and New York with the current Broadway hit Monty Python's Spamalot.

In 1978, A&M Records released Tim Curry's debut solo album. Entitled Read My Lips, the album featured an eclectic range of songs (mostly covers) performed in diverse genre. Highlights of the album are a reggae version of the Beatles song "I Will", a rendition of "Wake Nicodemus" with full bagpipe backing, and an original bar-room ballad, "Alan".

The following year, Curry's second and most successful album was released. Titled Fearless, the LP was more rock-oriented than Read My Lips and mostly featured original songs rather than cover versions. The record included Tim Curry's only US charting songs: "I Do the Rock" and "Paradise Garage".

Curry's third and final album, Simplicity, was released in 1981, again by A&M Records. This record did not sell as well as the previous offerings, due in part to a less appealing, more maudlin sound. This record combined both original songs and cover versions, and is commonly held to be the weakest of the three albums.

In 1989, A&M released The Best of Tim Curry on CD and cassette, featuring songs from his albums (including a live version of "Alan") and a previously-unreleased song, a live cover version of "Simple Twist of Fate".

Curry toured America with his band through the late 1970s and the first half of the 1980s.

Curry's first full-time role was as part of the original London cast of the musical Hair in 1968. Here he first met Richard O'Brien, who went on to create his next full-time and perhaps still most famous role, that of Frank N. Furter in the Rocky Horror Show.

Originally Curry rehearsed the character with a German accent and peroxide blonde hair, but the character evolved into the sly, very upper-class English (He says 'dine' instead of down, 'brine' instead of brown etc) drag-wearing mad scientist incarnation that carried over to the movie version and made Curry both a star and a cult figure. He continued to play the character in London, Los Angeles and New York until 1975.

For many years, Curry was reluctant to talk about Rocky Horror, feeling that it was a trend that had gone too far and had distracted attention away from his later roles. However, in recent years he has been much more open about discussing the show and now recognises it as a "rite of passage" for many young people.