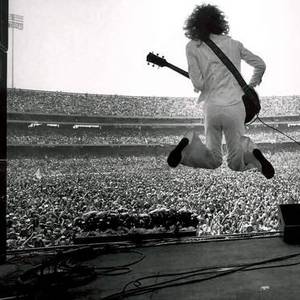 Peter Frampton (born 22 April 1950 in Beckenham, Kent) is a British musician, best known today for his multi-platinum selling solo work in the mid-1970s when he was an "arena rocker". He originally became famous, however, as a young member of psychedelic era band The Herd and became a teen idol in Britain. Steve Marriott reportedly wanted to bring the 18 year old Frampton into the Small Faces lineup but when rebuffed, started Humble Pie with Frampton instead.

After touring the US and Europe for two years, he left Humble Pie as the group was gaining popularity because of disdain for Marriott's hard living lifestyle and screaming boogie rock direction. Aside from his work with Humble Pie, other recordings of this era that feature Frampton include albums by Harry Nilsson, Jerry Lee Lewis, and George Harrison.

His solo debut was 1972's Wind Of Change, which did not fare well on the charts, and neither did two more efforts, one under the moniker Frampton's Camel. Constant touring though began to create awareness of his talents and 1974's Frampton LP went gold.

He gained lasting international fame by 1976 when his much-loved live album, Frampton Comes Alive! was released. Having built up his reputation on the road, the LP debuted at No. 1 on the charts in January 1976. It was long considered the best-selling live album of all time, moving over 16 million copies worldwide.

In 1978, Peter suffered a near fatal car crash in the Bahamas, which left him with a concussion, muscle damage and broken bones. But in 1979, he released the album 'Where I Should Be', which went gold and produced the hit 'I Can't Stand It No More'.

His extensive use of the Talk Box effect was and still is an integral part of the Peter Frampton experience.

His albums never regained the high chart placements of the 70's era but he has continued his musical career none the less. Among the gimmicks he's employed to maintain interest have been releasing Frampton Comes Alive II, as well as joining Ringo Starr's touring revue, recording two CDs with ex-Stone Bill Wyman and unsucessfully attempting to reunite with Steve Marriott before his death in 1991. Other notable occasions include starring with The Bee Gees in a film version of The Beatles Sgt Pepper's Lonely Hearts Club Band album and playing with David Bowie on his Never Let Me Down album and tour.

Peter now resides in Cincinnati, Ohio and can still be found playing concerts around the world.

Hummingbird in a Box

Show Me the Way: The Collection