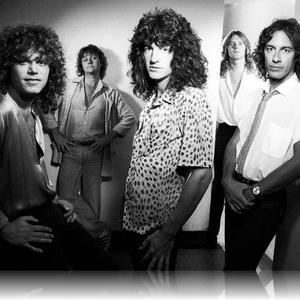 REO Speedwagon is an American rock band that grew in popularity in the Midwestern United States during the 1970s and peaked in the early 1980s as one of America's most popular arena rock bands at this time. REO Speedwagon hits include "Keep On Loving You" and "Can't Fight This Feeling". Both songs are power ballads, the former being prototypical of the genre and appearing on the group's most commercially successful album, "Hi Infidelity".

That album also included the hit "Take It On The Run", a song that peaked at number five on the U.S. charts. The band continues to tour and release albums, their latest being "Find Your Own Way Home" with songs such as "Smilin' In The End".

REO Speedwagon was formed by students attending the University of Illinois in Champaign, Illinois in the fall of 1967 to play cover songs in campus bars. The band's name came from Ransom Eli Olds (REO) an early 20th Century truck manufacturer of the Speedwagon model, commonly used for fire engines. The first line up consisted of Alan Gratzer on drums and vocals, Neil Doughty on keyboards, Joe Matt on guitar and vocals and Mike Blair on bass and vocals. In the spring of 1968, Terry Luttrell became lead singer, and Bob Crownover and Gregg Philbin replaced Matt and Blair. Joe McCabe played sax at this time until moving to SIU. Crownover played guitar for the group until the summer of 1969 when Bill Fiorio replaced him. Fiorio then departed in late 1969, eventually assuming the name Duke Tumatoe, and went on to form the All Star Frogs. Another guitarist, Steve Scorfina, came aboard briefly, and was replaced by Gary Richrath in late 1970.

Richrath was a Peoria, Illinois-based guitar player and prolific songwriter who brought original material to the band including REO's signature song "Ridin' The Storm Out". With Richrath on board, the regional popularity of the band grew tremendously. The Midwestern United States was the original REO Speedwagon fan stronghold and is pivotal in this period of the band's history.

The band signed to Epic Records in 1971. Paul Leka, an East Coast record producer, brought the band to his recording studio in Bridgeport, Connecticut where it recorded original material for its first album. The lineup on the first album consisted of Richrath, Gratzer, Doughty, Philbin, and Luttrell.

The band toured relentlessly under guidance from early manager Irving Azoff. The band's most successful period featured lead vocalist Kevin Cronin who joined the band briefly for their second album T.W.O in 1972, and left in the middle of recording the Album "Ridin' The Storm Out" and returned in 1976, co-producing with Richrath their landmark Live: You Get What You Play For. Ridin' the Storm Out was completed with Michael Bryan Murphy on the microphone. Murphy stayed on for two more albums, "Lost in a Dream" and "This Time We Mean It", before Cronin returned to the fold in January 1976 and recorded "R.E.O.", which was released that same year.

They grew in popularity in the Midwestern United States during the early 1970s and peaked in popularity in the early 1980s. The band's first mid 70s FM hit was the Richrath composed concert fave "Ridin' The Storm Out", and their first gold record was a live album, 1977's "Live: You Get What You Play For". Their hard rocking live show was so integral to their success, their label released another live album in 1978, "More Live".

In 1977, Philbin was replaced with Bruce Hall to record the first studio album that reached platinum, "You Can Tune A Piano, But You Can't Tuna Fish", released in 1978 which received FM radio airplay but fell short of the Top 40. In 1979, the band took a turn back to hard rock with the release of Nine Lives.

By 1981's "Hi Infidelity" they had reached a new peak, and the LP spawned several major radio hits including "Keep On Loving You", "Don't Let Him Go" and "Take It On The Run" which went to #5 on the US charts, and the Cronin composed "Time For Me To Fly, released on the "Tuna" album.

REO Speedwagon followed up the "Hi Infidelity" LP with the power ballad "Can't Fight This Feeling" from Good Trouble in 1982, and dented the charts again with 1984's "Wheels are Turning" album, 1987's "Life as We Know It" was the last new release to go gold, before popularity waned, and their long winning streak subsided. Founding members Richrath & Gratzer left the band, essentially ending a 20 year arena rocking run, but the band's collections continued to sell and earn classic rock & retro power pop airplay. Richrath and Gratzer was replaced by Miles Joseph and Graham Lear, Cronin's band members from jazz ensemble called "The Strolling Dudes". And soon Lear and Joseph was replaced by Bryan Hitt (formerly of Wang Chung) and Dave Amato.

Nowadays Reo Speedwagon remains a U.S concert circuit staple, mostly known as a crowd pleasing classic aor genre rock band. Still fronted by longtime vocalist Cronin, currently the only original member in the 21st century touring lineup is keyboardist Neil Doughty. The hired guns brought in since have had stints in band's like Ted Nugent and Wang Chung. Spurred on by numerous re-packagings of their back catalog, and successful newer live recordings, in 2007 they released "Find Your Own Way Home" the group's first new studio album in more than ten years. Though it did not chart as an album, it produced two singles which appeared on Billboard's Adult Contemporary radio chart.

REO Speedwagon continues to tour regularly, performing mostly their classic hits. They are popular on the fair and casino circuits, but still team with other acts to play larger venues.

REO Speedwagon's birth place was reportedly a Red Lion Inn, on Green Street near the U of I campus (Champaign-Urbana, IL).