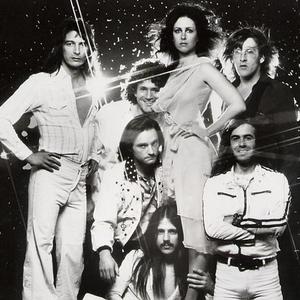 During the transitional period of the early 1970s, Paul Kantner (founding member of Jefferson Airplane) recorded Blows Against the Empire, a concept album featuring an ad hoc group of musicians that he dubbed Jefferson Starship, marking the first use of that name. This edition of Jefferson Starship (such as it was) included members of Crosby, Stills, Nash & Young (David Crosby and Graham Nash) and members of Grateful Dead (Jerry Garcia, Phil Lesh, Bill Kreutzmann, and Mickey Hart), as well as some of the remaining members of Jefferson Airplane (Grace Slick...

By 1973, after the breakup of Jefferson Airplane, with Kaukonen and Casady now devoting their full attention to Hot Tuna, several of the musicians who worked on Kantner, Slick, and Freiberg's album "Baron von Tollbooth & the Chrome Nun" formed the core of a new lineup that was formally reborn as "Jefferson Starship" in 1974. Kantner, Slick, and Freiberg were charter members. The line-up also included late-Airplane holdovers drummer John Barbata, Marty Balin,and fiddler Papa John Creach (who also played with Hot Tuna), along with Pete Sears (who, like Freiberg, played bass and keyboards) and twenty-year-old guitarist Craig Chaquico.
Eventually, Slick's alcoholism became a problem, which led to two nights of disastrous concerts in Germany in 1978. The first night, fans ransacked the stage when Slick failed to appear. The following night, Slick, in a drunken stupor, shocked the audience by using profanity and sexual references throughout most of her songs. She also reminded the audience that their country had lost during World War II , repeatedly asking "Who won the war?", and implied that all residents of Germany were responsible for the wartime atrocities. After the debacle, she left the band.

After the 1979 release of Freedom at Point Zero (which spawned the hit single "Jane"), Grace Slick returned to the band. She joined in time to contribute one song, "Stranger", on the group's next album, Modern Times (1981). Modern Times also included the notorious "Stairway to Cleveland," in which the band defended the numerous changes it had undergone in its musical style, personnel, and even name. One noted personnel change in the group was when Dunbar left and was replaced by Donny Baldwin, who performed with Thomas in the Elvin Bishop Group. Slick remained in the band for Jefferson Starship's final two albums, Winds Of Change (1982) and Nuclear Furniture (1984). Around this time, the band began enthusiastically embracing the rock-video age. Grace Slick would appear frequently on MTV and such music-oriented television shows as Solid Gold, giving the band a high visibility in the MTV era. However, the Jefferson Starship albums of this era were only modestly successful, yet the band remained a gold-selling (and thus commercially credible) act, and a popular concert draw.

In 1984, Kantner (the last remaining founding member of Jefferson Airplane) left the group, but not before taking legal action over the Jefferson name against his former bandmates, who wanted to continue as Jefferson Starship. Kantner settled out of court and signed an agreement that neither party would use the names "Jefferson" or "Airplane" unless all members of Jefferson Airplane, Inc. (Bill Thompson, Paul Kantner, Grace Slick, Jorma Kaukonen, Jack Casady) agreed. The band used "Starship Jefferson" during the proceedings, but ultimately settled on the name 'Starship'.

Mother Of The Sun