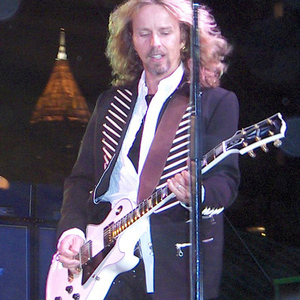 Tommy Roland Shaw (born September 11, 1953) is an American guitarist, best known for his work with the rock band Styx. In between his stints with Styx, he has played with the supergroup Damn Yankees and has released several solo albums. Early life & music career Tommy Shaw was born in Montgomery, Alabama in 1953 and played with many local bands in his early years. He left Montgomery after high school to join MS Funk, a Chicago-managed outfit that he played with for 3 years, which gave him a chance to be noticed by the band Styx during a 2-week club gig in Chicago.

Tommy Shaw was born in Montgomery, Alabama in 1953 and played with many local bands in his early years. He left Montgomery after high school to join MS Funk, a Chicago-managed outfit that he played with for 3 years, which gave him a chance to be noticed by the band Styx during a 2-week club gig in Chicago. After MS Funk disbanded, he went back to Montgomery to join a local group with his childhood friends called Harvest, which performed at a club in a bowling alley called "Keglar's Kove". Following Styx's move to A&M, guitarist and vocalist John Curulewski suddenly left the band shortly before they were to embark on a nationwide tour, and a frantic search to find a last-minute replacement was launched. While playing at the bowling alley bar, as a result of his previous experience with MS Funk in Chicago, Shaw got the call to audition for Styx and was quickly hired.

The first album with Shaw, "Crystal Ball" (1976), was titled after his own composition and also includes his songs "Mademoiselle" and "Shooz". Its follow-up, The Grand Illusion (1977) became the group's breakthrough album, which went platinum and also featured a radio hit by Shaw, "Fooling Yourself (The Angry Young Man)".

Though the '80's brought the downfall of Styx, it began with Styx riding a wave of commercial success with the #1 pop ballad "Babe" from the 9th Styx album, Cornerstone in 1979, which was written by keyboardist Dennis DeYoung. However, tension mounted within the band as Shaw and other band members expressed dissatisfaction with DeYoung's desire to pull the band into a pop radio & theatrical direction, while other members preferred the rock direction of the songs written by Shaw and guitarist James "JY" Young. For this reason, unbeknownst to the public-at-large, Dennis DeYoung was fired from the group in early 1980 for a brief unpublicized moment and quickly rehired, but this conflict would arise again. Shaw's ascerbation was furthered with his disatisfaction of the theatrical-themed album Paradise Theater and brought to a boil with the tour for the next album Kilroy Was Here, which featured a progressive stage show combined with an 11-minute movie intro and theatrical performances by the band. Shortly after the tour ended, Shaw left Styx in 1983 to pursue his solo career.

In the early 1990s, Shaw, Ted Nugent, Jack Blades, and drummer Michael Cartellone formed the band Damn Yankees. Their biggest hit, "High Enough", was co-written by Shaw. The band had a strong concert following; however, even though the 2nd album went platinum, the band separated.

Shaw returned to a reunited Styx in 1995 and embarked on a subsequent tour with them in 1996. Tommy would later record a fourth solo record in 1998: "7 Deadly Zens". Shaw has also worked with other artists on a "Pink Floyd's The Wall" tribute album. He also worked on a KISS tribute album, "Spin The Bottle: An All-Star Tribute to KISS", on which he sang "Love Gun".

Tommy teamed up with Night Ranger's Jack Blades in a duo appropriately called Shaw Blades and released an album entitled "Hallucination" in 1995. A second collaboration entitled "Influence" was released in early March 2007 and the duo appeared live on VH1 Classic backed up by famed Nashville songwriter Gary Burr. Shaw Blades did a short tour in Spring 2007 that was well-received. The tour included songs from Night Ranger, Styx, Shaw's solo albums and Damn Yankees. The duo also recorded the classic Christmas song "The Twelve Days Of Christmas" which was released in 2002 on the album "A Classic Rock Christmas", a compilation of classic Christmas songs recorded by various Classic Rock artists.

As of 2007, Shaw leads Styx along with James "JY" Young. Shaw & Young are the only remaining members from Styx's heyday.

Tommy Shaw will be inducted into the Alabama Music Hall of Fame in February, 2008 at their awards banquet to be held in Tommy's hometown of Montgomery, AL..

Sing For The Day! (Live)