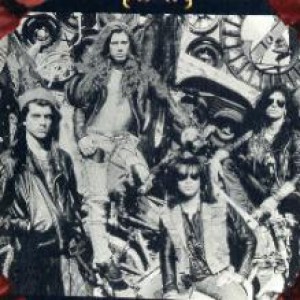 Spread Eagle burst upon the scene playing a brand of rock that came straight from the gutter and was dripping with elements of sleaze and sex. Paul DiBartolo (guitar), Rob DeLuca (bass) and Tommi Gallo had all been in a band called Bang, and when they met up with vocalist Ray West in New York, Spread Eagle was born. The group was quickly signed and sent into the studio. Tunes for the debut album had to be written while recording was taking place.

The self-titled debut featured a razor sharp guitar sound as well as some explicitly sexual lyrics, demonstrated through songs such as "Back On The Bitch" and "Scratch Like A Cat."
By the time work began on the follow-up, Gallo was in and out of the band. Session musicians recorded most of the drums on Open To The Public. For this album the group had toned down their lyrics and even went so far as to say people misunderstood the lyrics on the debut album. The album was a bit of a disappointment compared to their previous effort, and after the tour, which featured Dave Femia on drums, Spread Eagle broke-up.

Subway To The Stars (Japanese Edition)

Open To The Public