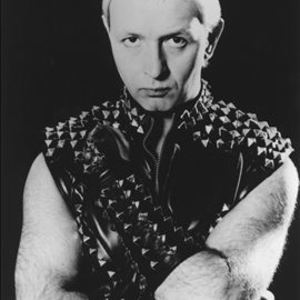 Robert John Arthur Halford (born 25 August 1951) is an English singer-songwriter, best known as the lead vocalist for the heavy metal band Judas Priest. Halford has almost a four octave vocal range. He is one of the most respected singers of heavy metal and rock music with a quasi-operatic vocal style and high-pitched screams. He has been nicknamed "Metal God" as a tribute to his influence on metal, after the Judas Priest song of the same name from 1980's British Steel .

He currently lives in Phoenix, Arizona, US, though he also maintains residences in San Diego, California and Amsterdam, Netherlands, as well as a home in his native Walsall, United Kingdom.

Halford was born and raised in Walsall, a town to the northwest of Birmingham, in England's West Midlands. He sang for numerous bands including Athens Wood, Lord Lucifer, Abraxas, Thark and Hiroshima.

Halford was introduced to founding Judas Priest member Ian Hill by his sister who was dating Hill as the time. Halford, a former cinema manager, joined the band as singer, bringing with him drummer John Hinch from his previous band, Hiroshima. In August 1974, the band debuted with the single "Rocka Rolla", before releasing an album of the same name a month later. The next albums were Sad Wings of Destiny (1976), which included a variety of old material; 1977's Sin After Sin; and 1978's Stained Class and Killing Machine (released in America as Hell Bent for Leather).

In 1980, the band released British Steel. The songs were shorter and more concisely structured, but retained the heavy metal feel. They released Point of Entry in 1981, featuring the song "Heading Out to the Highway". The 1982 album Screaming for Vengeance had a song, "You've Got Another Thing Comin'," which garnered strong US radio airplay, and the popular follow-up Defenders of the Faith. Turbo was released in 1986, during the glam metal era. In 1988, Ram It Down was released, showcasing re-recorded material that was scrapped from the Turbo years.

In August 1990, the Painkiller album dropped the 1980s-style synthesisers for almost all of the songs. Along with a change in musical style, the band's look changed as well. Rob Halford emerged with all-new tattoos, including a bent Judas Priest cross on his right arm and ring around his other, as well as a few on his shoulders. He also began shaving his head for the first time, claiming that his receding hairline was getting annoying to keep up with.

During the tour for Painkiller, Halford rode onstage on a large Harley-Davidson motorcycle, dressed in motorcycle leathers, as part of the show. He collided with a drum riser and fell off the motorcycle, breaking his nose. After regaining consciousness, Halford returned and performed the whole concert. In the band's Behind the Music episode, Halford named the accident as one of the events that caused the rift between him and the rest of the band that would eventually force them apart. However, during an interview with Bernard Perusse of The Gazette (1 August 2007), he is quoted as saying "And it absolutely did not [lead me to leaving the band]. It was just an accident."

After spending nearly 20 years with Judas Priest, Halford announced to the band on July 4, 1991 that he was leaving, and he also sued their label, Sony, for restrictive practices. Halford would leave the band in May 1992. During this period, Halford had recorded twelve studio and two concert albums with Judas Priest.

He first formed the band Fight with Judas Priest drummer Scott Travis, bassist Jack "Jay Jay" Brown and guitarists Brian Tilse and Russ Parish recording two albums between 1993 and 1995: War of Words (1993) and, after Parish's departure and his replacement by Mark Chausee, A Small Deadly Space (1995). While the first one was a straightforward tough and solid metal record, the second record had a grungier sound, making it less appealing for fans who had developed a taste for his debut album.

In between both albums, Fight released an EP, Mutations, featuring War of Words studio versions, live cuts and alternate mixes. Immediately before this, Halford had recorded a track called "Light Comes Out of Black" for the 1992 movie Buffy the Vampire Slayer. The song featured music provided by Pantera, although their contribution is uncredited. After Fight, he collaborated with guitarist John Lowery in an industrial-influenced project called 2wo which was produced by Trent Reznor and released on his Nothing Records label.

In July 2003 Halford returned to his former band, and they released Angel of Retribution in 2005. The world tour that accompanied the release marked the band's 30th anniversary.

The reunion with Judas Priest had been speculated on for some time, at least since the release of the Resurrection album which some critics claimed sounded more like Judas Priest than that band's previous album Jugulator (1997). Halford himself had never ruled it out, claiming in 2002 that "Gut instinct tells me that at some point it will happen".

In 2008 Halford recorded Nostradamus with Judas Priest, and appeared with the band at the The Metal Masters Tour. Long in the works, Nostradamus takes epic storytelling to a whole new level, as it recounts the life of this mysterious 16th Century French prophet.

Halford has performed as the vocalist for Black Sabbath at three shows. He replaced Ronnie James Dio for two nights in November 1992, when Dio elected not to open a show for Ozzy Osbourne after his contract had expired. Halford also replaced Osbourne in Black Sabbath on 25 August 2004 (his 53rd birthday) at an Ozzfest show in Camden, New Jersey, since Osbourne could not perform due to bronchitis.

In early 2008, Halford expressed a desire in making a black metal album, citing encouragement from former Emperor frontman Ihsahn.[13] He said he'd "...love to but it's all about finding the time". Subsequently, he voices character General Lionwhyte in the video game Br?tal Legend.

In 1998, Halford revealed he is homosexual in an interview on MTV. His sexual orientation was known to Judas Priest band members, and somewhat of an open secret among fans and the heavy metal press. Halford called the response from the heavy metal community "tremendous". This event was the subject of the song "Hats Off To Halford" by Atom And His Package. Halford returned to his metal roots in 2000 with his band Halford and the widely acclaimed album Resurrection (2000), produced by Roy Z. A live album in 2001 was followed up by 2002's Crucible. That same year, Halford had a small role in the film Spun in which he played an irritated sex store clerk.

* Krokus ? Headhunter - vocals on "Ready to Burn" (1983).
* Surgical Steel - Surgical Steel (demo)- vocals on "Smooth And Fast" (1984).
* Hear 'n Aid (1986).
* With Stryper on the Against the Law tour in Toronto, Canada, performing "Breaking The Law" (1990).
* Ugly Kid Joe ? America's Least Wanted - vocals on "Goddamn Devil" (1992).
* Skid Row ? B-Side Ourselves - vocals on "Delivering the Goods" in a live version (1992).
o the same outfit also performed for a live-in-studio session on the MTV show Headbanger's Ball (1992).
* Black Sabbath - on 14 and 15 November 1992 Halford took over vocals for Sabbath, who played a double performance at the Pacific Amphitheatre in Costa Mesa, Los Angeles, CA (1992). This was part of Ozzy Osbourne's "final" solo tour, prompting current Sabbath vocalist Ronnie James Dio, whom Osbourne had criticized and insulted on several occasions in the press, to refuse to play and subsequently leave the band for a second time.
* background vocals on the song "Hex 'n' Sex" for the album with the same title by the German band Brings (1993).
* Bullring Brummies, a studio session line-up that came together to contribute to the Nativity in Black tribute compilation album of Black Sabbath cover songs (1994).
* recorded the song "Light comes out of Black" with Pantera for the Buffy the Vampire Slayer soundtrack (1992).
* whilst playing their concert in Miami, FL, Metallica asked Halford on stage to perform a version of "Rapid Fire", originally recorded by Judas Priest. on British Steel in 1980 (1994).
* Queens of the Stone Age ? Rated R - vocals on "Feel Good Hit of the Summer" (2000).
* performing a live medley with Sum 41 and Tommy Lee of M?tley Cr?e, MTV's 20th Anniversary (2001).
* Furious IV ? Is That You? (2002).
* Spun motion picture (2002) - "Pornclerk" character.
* Br?tal Legend - Voicing the main villain Lord Dolivicus' minion General Lionwhyte, who is strongly based on the culture of hair and glam metal.
* Black Sabbath - Rob fills in for an ill Ozzy Osbourne during the Ozzfest stop in Camden, NJ, on 26 August 2004.