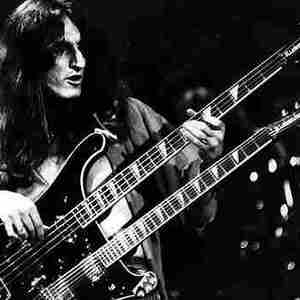 Geddy Lee OC (born Gary Lee Weinrib, July 29, 1953) is a Canadian musician who is the vocalist, bassist, and keyboardist for the progressive rock group Rush. Born in Toronto, Ontario, Lee grew up as the son of Polish-Jewish parents who were survivors of Nazi concentration camps Dachau and Bergen-Belsen. Lee's stage name (and later legal name) "Geddy" was inspired by the heavily-accented pronunciation of his given first name "Gary" by his mother. In 2004, Canadian Jewish News would feature Lee's reflections upon her experiences and his own Jewish heritage.

An award-winning musician, Lee's style, technique, and virtuosity on the bass guitar have proven very influential in the rock and heavy metal genres, inspiring such players as Steve Harris of Iron Maiden, John Myung of Dream Theater, Les Claypool of Primus, Cliff Burton of Metallica, and countless others. Lee's vocal style, while less influential, is nonetheless distinctive; one Rolling Stone critic opined a negative review in the Rolling Stone Album Guide that Geddy Lee's voice was a cross between Robert Plant's and Donald Duck's voices. Reference to the latter in the brief review upset many die-hard fans of Rush and Lee.

Lee's first solo effort, My Favorite Headache, was released in 2000. In addition to his composing, arranging, and performing duties for Rush, Lee has produced albums for various other bands, including Rocket Science, and recorded a short rendition of "O Canada" with Lifeson included on the "South Park: Bigger, Longer and Uncut" soundtrack. Geddy Lee is also heard singing the Top 20 hit "Take Off" on the McKenzie Brothers (Rick Moranis and Dave Thomas) 1981 comedy album The Great White North: Bob and Doug McKenzie, and on the Max Webster song, "Battle Scar," featured on their Universal Juveniles album, which saw both bands playing together live in the studio. Geddy shares lead vocals on this track.

Geddy is also a devoted baseball fan, and performed "O Canada" at the 1993 Major League Baseball All-Star Game, and took batting practice with the then-California Angels (circa 1992).

Along with his colleagues Alex Lifeson and Neil Peart, Lee was made an Officer of the Order of Canada on May 9, 1996. The trio were the first rock musicians so honoured.