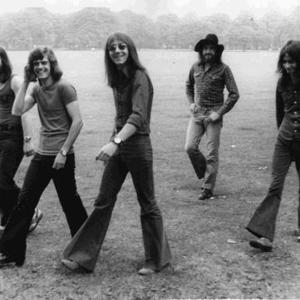 This band was from Scotland, their name is derived from an opera 'The Beggars Opera" by John Gay in 1728. The musicians of BEGGARS OPERA were Martin Griffiths (vocals), Rick Gardiner (guitar and vocals), Alan Park (keyboards), Gordon Sellar (bass, acoustic guitar and vocals), Virginia Scott (Mellotron and vocals) and Raymond Wilson (drums and percussion). BEGGARS OPERA made a lot of records but remained acting in the shade of most progressive rock bands.

Their debut-album "Act one" ('70 Vertigo) contains fluent and tasteful organ driven progrock with powerful "Sixties" sounding guitar work. The long track "Raymond's Road" is a splendid tribute to the "classics" featuring Mozart's A la Turka, Bach's Toaccata in d-fuga en Grieg's Peer Gynt Suite on the Hammond organ. The second album "Waters of Change" ('71) is build around the dual keyboard play of Alan Park and newcomer Virginia Scott and the distinctive, a bit cynical vocals of Griffiths. The nine tracks are beautiful symphonic landscapes with many organ solos, some swelling and glorious Mellotron waves (like The MOODY BLUES and early KING CRIMSON) and fine electric guitarwork. On the third LP "Pathfinder" BEGGARS OPERA seems to have reached its pinnacle: strong and alternating compositions with lush keyboards (Mellotron, organ, piano and harpsichord), powerful electric guitarplay and many shifting moods (even Scottish folk with bagpipes). The band released three more albums but, in my opinion, they sounded far less captivating: "Get your dog off me" ('73), "Sagittary" ('76) and "Beggar's can't be choosers" ('79).

Beggars Opera back catalogue including the 4 Vertigo albums: Act One, Waters of Change, Pathfinder and Get Your dog off Me, and 2 Jupiter Records Germany albums Sagittary and Beggars Can't Be Choosers, have been digitally remastered and are now available on CD by Repertoire Records Germany.

In 1976: Ricky Gardiner went on to work with David Bowie/Low album and Iggy Pop/ Lust for Life album, on which he co-wrote legendary song The Passenger with Iggy Pop.