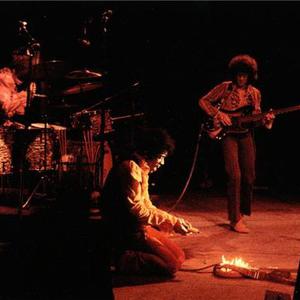 The Jimi Hendrix Experience was a short-lived, yet highly influential rock band famous for the guitar work of Jimi Hendrix on songs such as Purple Haze, Foxy Lady, Hey Joe, Voodoo Chile (Slight Return) and All Along The Watchtower. Rounding out the Experience were Noel Redding and Mitch Mitchell on bass and drums respectively. Hendrix arrived in England in October 1966, and auditions were launched to find him a backing band. Noel Redding was chosen for the bass spot. Even though he had never played bass before auditioning (he was a guitarist), Hendrix liked his look and attitude.

Hendrix arrived in England in October 1966, and auditions were launched to find him a backing band. Noel Redding was chosen for the bass spot. Even though he had never played bass before auditioning (he was a guitarist), Hendrix liked his look and attitude. Mitch Mitchell was a seasoned London drummer who brought jazz chops and a lead style of playing to the table. He would prove to be Hendrix's most valuable musical partner.

Though initially conceived as Hendrix's backing band, The Experience soon became much more than that. Along with Cream, they were the first group to popularize the "power trio" format, which essentially strips a rock band lineup down to the essentials: bass, guitar and drums. This smaller format also encourages more extrovert playing from the players involved, often at very high volumes. In the case of The Experience, Hendrix mixed lead and rhythm guitar duties into one, while also making use of then-revolutionary guitar effects such as feedback and wah-wah.

Mitchell played hard-hitting jazz-influenced grooves that often served a melodic role as much as they did timekeeping. Redding was the eye of the storm, playing deceptively simple bass lines that helped to anchor the band's sound. Visually, they decked themselves out in matching psychedelic costumes and permed afros. The Experience were also one of the first integrated bands. Given the racial turmoil of the times, the sheer idea of having a black frontman with two white men was quite a strong political statement.

The lineup first came to prominence during the Monterey Pop Festival, one of the first major music festivals. The band delivered a stellar performance, that ended with Hendrix famously setting his guitar on fire. The moment was immortalized in a photograph which was used as a cover of Rolling Stone[1] magazine. The appearance was also filmed and put into the documentary film Monterey Pop. This brought them to the attention of North American audiences. They were then asked to go on tour with The Monkees as the opening act. They abruptly left the tour after only a few dates. It was later revealed by Chas Chandler as being a publicity stunt.

With the band, Hendrix recorded his three most successful albums, Are You Experienced?, Axis: Bold As Love, and Electric Ladyland. In June of 1969, he decided to break up the group. Deteriorating relations with Redding had come to a head, and he also felt stilted by the trio format. He used a larger band lineup for his Woodstock concert in August 1969, but would revert back to the trio format with the Band of Gypsys and Cry Of Love lineups. With the exception of the Band of Gypsys, Mitchell continued working with Hendrix up until Hendrix's death in 1970.