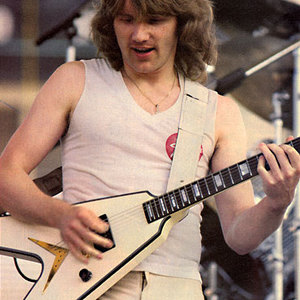 Rik Emmett has his fair share of gold and platinum hanging on the wall after surviving three decades in the music business, after first surfacing as the lead guitarist, singer/songwriter of the rock trio Triumph. Awards like Best Guitarist at the 1981 Canadian Juno Awards, induction into the Canadian Rock Hall of Fame in ?93, and Best Smooth Jazz Guitarist in 2005 highlight an ever- evolving career. There's a true singer/songwriter at the heart of it all ? a multi-dimensional artist, with nothing to prove except the dignity and maturity of his continuing commitment to great music.

?I played everything - from Jazz festivals to soft-seater concerts to giant outdoor electric rock band shows to orchestra gigs to folk clubs as an acoustic duo last year,? says Emmett, ?and I love the challenging range of it all.?

Audiences marvel at the versatility of the tenor singer/songwriter as he continues his prolific run of solo indie CDs, from classical to jazz to acoustic pop & folk vocal stylings. While this wide catalogue of original songs garners radio airplay on easy-listening, smooth jazz, and CBC formats (while the heritage Classic Rock stuff keeps on rolling right along), his dozen years as a writer for Guitar Player Magazine and his continuing over 25 year sponsorship by Yamaha have kept his international reputation as a musician alive and well. A former VP of the Songwriter's Association of Canada, Rik teaches a Career Development course in the Humber College Music program, and is the Artistic Director of the Humber Songwriting Workshop.

Rik Emmett was a relatively unknown singer/songwriter/guitarist on the local Toronto scene in September of ?75 when he joined a newly-formed hard rock trio called Triumph. By ?79 three albums had gone gold and platinum in Canada - two of these charted in the States, receiving serious radio airplay. By ?81, they were firmly established as one of the premier touring rock acts in North America, with generous FM radio airplay support and heavy rotation on the fledgling MTV cable channel. In the next seven years, the band released ten albums, all of which went gold, with four turning platinum in Canada. In the U.S., two went gold. Emmett's name frequently appeared in guitar magazine polls and he won several prestigious awards, including Best Lead Guitarist nationally in 1981. He left the band to begin his solo career in '88, but was inducted into the Canadian Rock Hall of Fame in '93 as one of the band's original members.

Rik's solo career spawned three releases for Duke Street/MCA Records in the early ?90's. The first, Absolutely, went gold in 1990, yielding the hits "Saved by Love" and "Big Lie", two songs that provided a transition from arena rock while maintaining continuity at FM radio. Perhaps a bit more of a surprise was the searing ballad "When a Heart Breaks", which crossed a rock guitar hero over into Adult Contemporary radio formats and revealed a more sensitive singer/songwriter persona. "World of Wonder" also received substantial airplay and showcased an expanding lyrical and stylistic range.

Rik's Ipso Facto CD followed in 1992, offering up the hits "Out of The Blue" (a jazzy-bluesy tribute to Stevie Ray Vaughan, Jimi Hendrix and Wes Montgomery) and "Bang On", a rocking return to one of Rik's recurring themes of positive motivation and inspiration. Ipso Facto was a tour-de-force of stylistic versatility, but it was no surprise to devoted fans who have become familiar with his diverse merge of Classical, Jazz, and Blues fills between his harder rock anthems and progressive flourishes of his past recordings.

A strong singer/songwriter album called Spiral Notebook was released in 1995, which earned notice through the airplay of its two sensitive balladeer singles "Let Me Be The One" and "The Longing", with the former becoming popular for weddings.

In 1996, Rik Emmett began testing his musical convictions by releasing work on his own independent record label, which he called Rockit Sounds. Following those instincts paid off both artistically and financially. The first release was Ten Invitations from the Mistress of Mr. E, which featured beautifully arranged original instrumentals of Classical nylon-string guitar with a standout Latin Flamenco tracked entitled "El Cuento del Gadjo". Critics and fans were quickly reminded that this 'rock guitar god' was not a one-trick pony, when he followed up with Part Two of his guitar trilogy, Swing Shift, which featured a completely different musical direction: Jazz, Swing and Fusion, with a credited influence to George Benson. The CD was well received and piqued the interest of brand-new fans in growing musical circles. Perhaps more importantly, the spirits of die hard supporters were elevated by witnessing an artistic transformation that defied mainstream classification. Raw Quartet, the final CD in the trilogy, was released in early 1999, and displayed Rik's passion and natural affinity for the Blues.

1999's Live At Berklee (highlights from sold out shows at the prestigious Berklee College of Music in Boston) was followed by a traditional Spirit of Christmas album, recorded in collaboration with Glass Tiger keyboardist Sam Reid. 2002 brought the release of a compilation 20th Century Masters which was labeled as the ?Best of Rik Emmett Collection? through Universal, followed by another widely-acclaimed instrumental Smooth Jazz masterpiece CD, Handiwork. In the late summer of 2003, the acoustic singer/songwriter re-emerged with the Good Faith CD, and another new chapter was written in an already storied career.

In 2005, Rik was honored as Guitarist of the Year at the Canadian Smooth Jazz Awards, and in the summer of 2006, the wide range of Emmett's abilities went on display - from a smooth jazz festival in Canada to a heavy metal festivals in Sweden: from Artistic Directing a songwriting workshop to hanging and jamming with Alex Lifeson of Rush at the Guitar Workshop Plus: and from five classic rock outdoor shows, to an idyllic afternoon acoustic duo gig at the Chateau-des-Charmes winery in Niagara-on-the-Lake.

A guitar magazine once wrote that Rik Emmett is "his own worst enemy. He's one of the only guitarists out there who may be too talented for his own damn good". Partly true, in our celebrity/tabloid/sound bite world: but the comment also recognizes the artist as unique, and offers insight on a twenty-year plus solo career, still vibrant and strong, based on a true devotion to his talents and musical diversity instead of a slave to superficial fashion and celebrity, with its excess baggage.

An active member of World music sensation P.R.O., which features Pavlo, Rik, and Oscar Lopez, the Strung-Out Troubadours, and Airtime, Rik has been extremely busy with his live performances and recordings. He has held true to his dreams and convictions, which he shares with every audience, of every stripe, every night that he performs.

Ten Invitations From The Mistress Of Mr. E