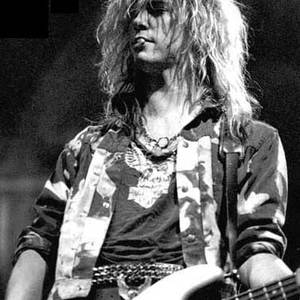 Michael Andrew McKagan, better known as Duff 'Rose' McKagan, was born February 5 1964. He is an American musician and bassist, who is best known for his thirteen-year tenure in the 1980s hard rock band Guns N' Roses. He is currently the bassist for the groups Velvet Revolver and Jane's Addiction as well as the guitarist and lead vocalist for his own group Loaded (also known as Duff McKagan's Loaded).

Michael Andrew McKagan was born in Seattle, Washington, the youngest of eight children born to Elmer and Alice Marie McKagan. They were a somewhat musical family with every member playing at least one instrument. It was his brother Bruce who taught him his first bass chords.

Duff's father goes by the name Mac, and his mother is Marie. Although best know as a bass player, Duff also played drums in several bands, including, most notably, a stint with the legendary Seattle pop-punk band the Fastbacks, whom he joined at the age of 16 in 1980. He describes his home city as "a rowdy rock 'n' roll town with a hip underground." As well as drums and bass, McKagan also has the ability to play other musical instruments, he plays guitar and even played piano on the song Misery from the Loaded album Dark Days.

McKagan headed to California when he was nineteen, and played in dozens of rock bands around Los Angeles including Ten Minute Warning (he was replaced by Daniel House of Skin Yard), and a hardcore punk band called The Fartz. Answering an ad for a bass player in a local magazine, he met guitar player Slash and drummer steven adler of the band Road Crew at L.A.'s legendary 24 hour deli and rock hangout Cantor's. Duff expected some punk with a penchant for '70s rock, but found two long-haired guys instead.

From the wreckage of the bands L.A. Guns and Hollywood Rose, Axl Rose and Izzy Stradlin joined Tracii Guns, Ole Beich, and Rob Gardner to form Guns N' Roses. Initially formed to meet booked gigs for the disbanded acts, the new line-up was finalized on June 6, 1985. Duff became the band's bassist, replacing Ole Beich, and after two days of rehearsal the newly formed group played their debut gig as GN'R on a Thursday night at the Troubadour.

He brought his punk rock influences to the group, being a huge fan of The Clash and the Ramones.

Plagued by drug and alcohol addiction, McKagan survived for eight years in the highly volatile band before finally resigning in early 1998, due to Axl Rose's demand that he focus only on Guns N' Roses, and not any other projects, as well as the fact that "Axl was completely taking over". He is also known for his alcohol induced acceptance at the 1990 American Music Awards. Upon receipt of GNR's second award, McKagan and Slash stumbled to the stage appearing very drunk, holding drinks and smoking cigarettes. Within a span of 20 seconds, Slash managed to curse twice in his slurred speech before being interrupted by a music overdub and positioning of a camera on a curtain with the AMA logo. After the first f-word, an audible gasp was heard from the crowd, prompting Slash to cover his mouth and laughingly utter an "oops". Duff laughed along with him. Since then, many live shows are delayed a few seconds to prevent a similar incident. Adler and Stradlin departed the band in 1990 and 1991, respectively. Meanwhile in 1990 Duff and Slash co-wrote and played a few songs on Iggy Pop's Brick By Brick.

After a half-hearted attempt at drug rehabilitation, he kick-started a solo career with 1993's Believe in Me. In 1994, McKagan's pancreas exploded (due to acute alcohol-induced pancreatitis) and he underwent emergency surgery. The doctors told him that if he did not quit drinking, he would be dead within a month, and so McKagan quickly became sober.

In the years that followed, McKagan sobered up his act, became a father and concentrated on his solo career. He recruited drummer Abe Laboriel Jr., Michael Barragan and Izzy Stradlin to help him record Beautiful Disease, with a 1999 release on Geffen Records.

In 1995 he collaborated with Slash in his group Slash's Snakepit, co-writing a song called Beggars and Hangers-on, which he played live at the Palace during a Snakepit show in May of that year. He would go on to form Neurotic Outsiders, an alternative rock super-group consisting of GN'R drummer Matt Sorum, Sex Pistols guitarist Steve Jones and John Taylor of Duran Duran on bass. They played the L.A clubs circuit in the late 90s, and toured the U.S. in 1996. Debut album, Neurotic Outsiders, was released in September 1996. He then reformed Ten Minute Warning, releasing the self-titled Ten Minute Warning, and formed his own group Loaded.

Duff also tried it as an actor in 1997. He had a part in the TV serial Sliders, which aired in May of that year, as a dead rocker vampire.

Duff was living between Los Angeles and Seattle from 1994 to 1999, because his mother was battling Parkinson's disease and he felt he had to be with her. His mother died in early April 1999 and since then, he lives in Seattle.

He put together another band called "Mad for the Racket" or also known as The Racketeers in 2000, and they played in London in December 2000. Duff did not play on that show. In 2001, he reunited with Loaded for the club circuit in Seattle. He also ran a marathon in 2001 with bib number "11468."

In August 2001, Loaded toured Japan. Duff also toured Japan with Izzy Stradlin to support Izzy's new album River. Duff also appeared with J, ex-Luna Sea bassist, in a number of magazines and venues during his tour in Japan that J opened for.

Duff produced the debut EP Get Off by Betty Blowtorch and also appeared in the documentary film Betty Blowtorch And Her Amazing True Life Adventures directed by Anthony Scarpa.

Since April 2002, Duff has played bass guitar for the group Velvet Revolver together with ex-Guns N' Roses' members, Slash and Matt Sorum, as well as guitarist Dave Kushner and former Stone Temple Pilots singer Scott Weiland. Their debut album Contraband was released in 2004 and peaked at the top of the Billboard 200 chart. The group's second album, titled Libertad, was released in 2007.

In 2008, McKagan regrouped Loaded with the lineup still consisting of McKagan, Squires, Rouse and Reading. The band released extended play Wasted Heart in September in support of their UK/European tour. The follow up to Dark Days, Sick, was released on April 7, 2009 and charted at number 43 on the Billboard Top Heatseekers Chart. A tour of the US and Europe as well as South America followed along with stints supporting Black Stone Cherry and M&ouml;tley Cr&uuml;e. The group, with new drummer Isaac Carpenter, are currently working on material for a new album

In 2010, McKagan joined Jane's Addiction replacing previous bassist Eric Avery and is currently in the studio with the group working on material for a new album.