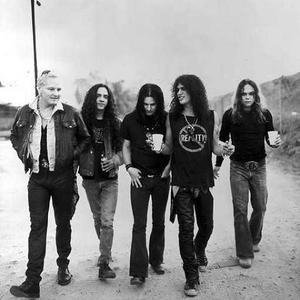 Beggars & Hangers-On was released as the albums first single. For the albums supporting tour, Zakk Wylde solo band members James Lomenzo and Brian Tichy joined the group in place of Inez and Sorum who had other commitments. According to Slash's auto-biography, Slash, when Snakepit were booking shows for another leg of their tour, the label pulled financial support after the record sold one million copies and with Guns N' Roses regrouping to record a new album, Snakepit disbanded in 1995.

In 1998, 2 years after leaving Guns N' Roses, Slash reformed the Snakepit with his Slash's Blues Ball band mate, bassist Johnny Griparic. Rounding up the new lineup was singer Rod Jackson and former Alice Cooper duo Ryan Roxie on guitar and Matt Laug on drums. After signing a deal with Koch Records, they released Ain't Life Grand in October 2000. Roxie, who had touring commitments with Alice Cooper, left the group and was replaced by guitarist Keri Kelli (Big Bang Babies). The group went on to tour which included dates supporting AC/DC as well as co-headlining shows with Billy Idol.

Before a show in Pittsburgh, Slash passed out, waking up two weeks later in a hospital. He suffered cardiac myopathy caused by years of alcohol and drug abuse, with his heart swelling to the point of rupture. After being fitted with a defibrillator and undergoing physical therapy, Slash returned to the group to finish their club tour. Slash then disbanded the group soon after the tour finished in 2001.