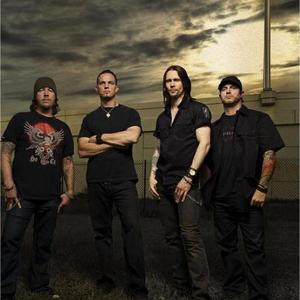 Alter Bridge is an American alternative metal/hard rock band that was formed in 2004 in Orlando, Florida. It consists of lead guitarist Mark Tremonti, bassist Brian Marshall, and drummer Scott Phillips (drummer), all of whom are also members of Creed, alongside lead vocalist and rhythm guitarist Myles Kennedy, formerly of The Mayfield Four and the frontman of Slash's current solo project. Tremonti named the group after an actual bridge that used to be located in Grosse Pointe, Michigan, near his former home on Alter Road.

Alter Bridge released their debut album One Day Remains in 2004, with the first single Open Your Eyes.

After the band's first tour, they dropped their contract with Wind-up Records in 2006 and signed with Universal Republic, releasing their second album, Blackbird, which was positively received by critics, in October 2007. The band spent the next two years touring and working on other projects before reconvening in 2010 to work on their third album. Titled AB III, the album received critical success and was released in October 2010 on Roadrunner Records. This album has a much darker feel, lyrics wise, and a more dynamic and progressive sound than the previous two. In January 2011, the band's first live album and concert film, Live from Amsterdam, was finally released in stores after two years of delays. A second concert film, Live at Wembley, was released on March 26, 2012.

Despite relatively low mainstream success and label support for the majority of the band's career, Alter Bridge's music has been critically successful, and the band has become known for its frequent, extensive touring and loyal fanbase. The individual members of Alter Bridge are also involved with various other projects, including solo and session work, Creed, and Kennedy's collaborations with Slash and former members of Led Zeppelin. In 2009, Ultimate Guitar Archive named Alter Bridge the 36th greatest band of the decade.

Alter Bridge's music is often characterized and described as "heavy, yet melodic." Their music has been listed under several genres including rock, hard rock, alternative metal, post-grunge, heavy metal, and progressive metal.

Alter Bridge's music is co-written by Kennedy and Tremonti and arranged by Alter Bridge and the band's lyrics are written primarily by Kennedy, although Tremonti wrote most of the lyrics and all of the music on One Day Remains. The lyrics on the first two Alter Bridge albums mainly touch on hope and overcoming regret, sadness, grief, loneliness, pain, and addiction.The subject matter on their third release, AB III, is noticeably darker, with lyrical themes mostly based on struggling with faith and a loss of innocence, as well as other dark themes including apathy and struggling with the concepts of death and mortality.

Often recognized for their live performances, the band generally does not perform in larger venues such as arenas and amphitheaters. Instead, Alter Bridge regularly plays smaller venues such as House of Blues, as was their intention from the start. Myles Kennedy said in an interview with Artistdirect, "We're definitely a live band. That's what it's all about for us. We make records so we can go out and play for people." The band has been joined on stage by several surprise guests, including Slash, Paul Reed Smith, Wolfgang Van Halen, and Eric Friedman, and several notable musicians, such as Eddie Van Halen, Jimmy Page, and John Paul Jones, have been reported to have attended an Alter Bridge concert. Alter Bridge's live performances are generally praised.

Live At The Royal Albert Hall Featuring The Parallax Orchestra