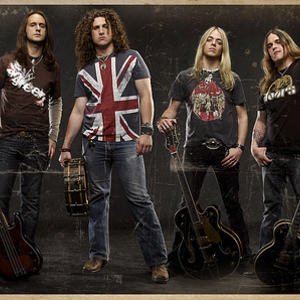 They originate from Edmonton, Kentucky. Chris Robertson and John Fred Young, son of The Kentucky Headhunters' rhythm guitarist Richard Young, started to play music together early in their teens and Jon and Ben soon followed. Black Stone Cherry officially formed on June 4, 2001. They then took over the practice house that had been used by The Kentucky Headhunters since 1968 and began to record tracks. After the band finished recording, they returned to Edmonton for a homecoming gig in the gym of the local middle school, which was attended by 1500 people. After the band's self-titled debut album was released, Chris's former school principal invited the band back to Edmonton to celebrate with a concert. As the band entered the town, the streets were covered with signs welcoming them back.

In July 2007, they released a second EP containing the song "Rain Wizard" along with two previously unreleased tracks.

The first live album by Black Stone Cherry was released on October 31, 2007 immediately following the concert at the Astoria in London. They joined Def Leppard and Whitesnake in the summer of 2008 for European dates.

On August 19, 2008 Black Stone Cherry released their second album, entitled Folklore and Superstition. Three singles from the album, "Blind Man", "Please Come In" and "Things My Father Said" have been released.

In May 2009, they supported Nickelback's Dark Horse tour.

The White Trash Millionaire Songfacts states that their third studio album, Between the Devil and the Deep Blue Sea, got an unexpected early release on the bittorrent tracker, Demonoid on May 27, 2011 due to an employee error at an unspecified Walmart. The official release date was May 31, 2011.

The song writing of Black Stone Cherry is often praised for great storytelling and delivering a strong message. For example, the song "Lonely Train" is about the effect on families when a relative goes to fight in a war. The song "Rain Wizard" is about a local legend of mysterious wisemen who could bring the rain in times of drought. "Backwoods Gold" is about a local man who ran moonshine out of the hardware store in the middle of Edmonton.

Out Of Pocket (CDS)

Live From The Royal Albert Hall... Y'all!

Give Me One Reason (CDS)