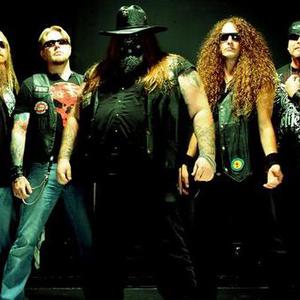 Upon first glance of the Texas Hippie Coalition, one may come to the conclusion that they are an intimidating group that lives up to the clich? of their nickname ?band of outlaws.? However, looking a little closer at lead vocalist Big Dad Ritch, bassist John Exall, guitarists Randy Cooper and Crawfish, and drummer Ryan Bennett; it's hard to ignore that they are indeed much more than meets the eye. They are a loyal and talented ?band of brothers? who consider themselves just as much family as they are band mates.

?We're as southern as southern can be,? says ?Big Dad' Ritch, the behemoth front man and driving force behind Texas Hippie Coalition. ?Lynyrd Skynyrd, Molly Hatchet, ZZ Top, Waylon Jennings and Willie Nelson ? we're as outlaw as we can get, while at the same time having the power of that Texas groove, like Pantera. We're metal with a southern rock and roll spirit. We are a band of outlaws.?

Not outlaws in the bad-boy sense, outlaws in the artistic sense, drawing their inspiration from the vast tapestry of musical influences that spans the great state of Texas and beyond. While there's no denying the band's metallic epicenter, there's also no denying their kindred spirit with the original man in black, Johnny Cash. ?My dad raised me on cool stuff like Jimi Hendrix, Steve Miller and Alice Cooper, and he took me to see Johnny Cash at a young age,? says Ritch. ?The way he talked to the crowd between songs and the way he communicated with the audience, he left no separation. He made people feel like he was part of them and they were part of him ? ever since, that's what I've always wanted to be.?

It wasn't difficult for Big Dad Ritch, Randy Cooper and John Exall to find each other in Denison, Texas. Being a small town with a very limited amount of musicians, rival bands were forced to work together to set up road trips to cities, such as Dallas, in order to play shows and expand their musical aspirations. Originally starting in rival bands, Ritch, Randy and John found themselves bonding over their craft and the fact that the art of storytelling had become lost in heavy music. They started playing, writing and eventually recording together.

Shortly thereafter, Texas Hippie Coalition emerged from The Red River Valley that borders Northern Texas and Southern Oklahoma and ripped their way on to the metal scene with their self-released album Pride of Texas. Supporting the album and through their determination to put themselves in front of music fanatics from coast to coast, they've earned the respect of fans and peers with their hard-hitting style of music dubbed ?red dirt metal.? It was this momentum that led the band to drummer Ryan Bennett. When the group met Ryan as the graphic designer at their management company, they had no idea what talents he possessed as a musician himself until they had an opening for a new drummer, which he quickly jumped at the chance to audition for. Impressed, it was an easy position to fill when the band and their original drummer parted ways.

While the band was touring the country, brand new Dallas label, Carved Records took notice of THC's increasing success. Label owner Tim Porter and VP of Operations Phil Thomas felt the band's approach to success was congruent with their own for Carved Records and they immediately made Texas Hippie Coalition their inaugural signing at the end of 2009.

The group teamed up with multi-platinum producer, David Prater (Dream Theater, Firehouse) and headed to his studio in Oklahoma to record their second album, Rollin' to be released via Carved Records on July 6th, 2010.

The first single will be the already familiar and consistently requested band anthem ?Pissed Off and Mad About It.? A powerful song from the day it was written, it's come to full fruition in the studio with the band's current lineup adding the official Texas Hippie Coalition seal.

A highlighted track on Rollin' is ?Intervention,? a song the band unanimously chose as one of their favorites from their new recordings. "A driving tune with the feel of old Sabbath, the song hits you right in the chest and doesn't let up,? says Ryan. Adds Ritch of the lyrics, ?Everybody is sitting around waiting for everyone else to have an intervention these days, but this song is about realizing that you need to stop, stand up and get yourself through it on your own.?

Cooper calls ?Cocked and Loaded? one of the best representations of his band ? ?we're fired up, we're gonna hit it, we're cocked and loaded?? he says. But it's ?Groupie Girl? that Ritch thinks just might be the best song he's ever written. ?It's got Guns N' Roses with a ZZ Top swagger, and is beautiful from beginning to end ? it's about being in a town, being with a girl for a day or two, then you're gone. She may have been the love of your life, but you don't have the time to devote to the relationship. Instead of being shady, it's about being a southern gentleman ? ?I wish I could stay and always be here to wipe your tears away, but I've got to go on down the road??

And when Texas Hippie Coalition aren't on the road? ?You'll probably find us in an armchair drinking a beer, fishing on the river,? says Exall. ?We're not too good for anybody ? we are everybody.?

High In The Saddle

Dark Side Of Black