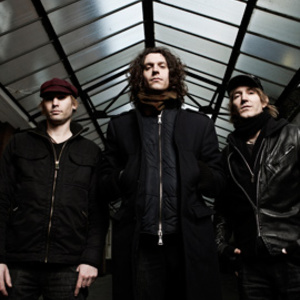 Daniel Davies - Guitar/Vocals Rich Mullins - Bass (Karma to Burn) Brad Hargreaves - Drums ?Anything that does not spring from tradition is plagiarized. Begin drawing and painting like the old masters; after that always do as you wish, you will always be respected? Salvador Dali Year Long Disaster took Salvador Dali's words to heart when they began constructing the mainframe ideas that would form their fundamental musical intentions.

?Anything that does not spring from tradition is plagiarized. Begin drawing and painting like the old masters; after that always do as you wish, you will always be respected?
Salvador Dali

Year Long Disaster took Salvador Dali's words to heart when they began constructing the mainframe ideas that would form their fundamental musical intentions. Modifying, in their own right, the original blues models of The Masters; Cream, Free, ZZ Top, Black Sabbath, and Led Zeppelin among others, Year Long Disaster are more apt to play shuffles as the base backbeat and to define choruses as whichever dynamic moment of the song appeals as most memorable. This moment may manifest itself in a riff, a recurring vocal line, or in a sonic assault stemming from sheer energy. Riffs may extend past 4 bars. Lyrics may not repeat themselves. Year Long Disaster embraces the humanity and simplicity in songwriting with the ability to improvise, allowing the audience to be involved in moments that will never exist again.

This band's work is also a reflection, one of the innumerable reflections of what they as individuals accomplish, write, and think. The pedigree of this band is complex and unusual. Lead guitarist and singer Daniel Davies is the 23-year-old son of Dave Davies of the Kinks. He was born in London and spent the first nine years of his life touring the world with one of the most legendary live acts of all time. Daniel can be seen as an infant in the arms of Susan St. James during an episode of Saturday Night Live, as she introduces his father's band. At thirteen, Daniel and his family moved from London to Los Angeles. Three years later his parents split, and Daniel moved in with his neighbor and godfather, movie director John Carpenter. Daniel lived with the Carpenters until his graduation from Hollywood High School. He then set out on his own to play music. For three years, he worked menial jobs and failed random drug tests for even more menial jobs, until he walked into a Hollywood grocery store to buy vodka. It was there he met bass player Rich Mullins.

Mullins had been in Los Angeles four days when he met Davies. Mullins had just moved from Holland, and was nurturing a gorilla-sized drug habit when he met Davies in the alcohol section of Pavilions. Mullins had been a founding member of the West Virginia instrumental hard rock band Karma to Burn. Karma to Burn had released three albums on Roadrunner Records, toured the world extensively and opened for such acts as Metallica and Pantera. Mullins left Karma to Burn to play in the Dallas, Texas band Speedealer. It was a feeble attempt to geographically remove himself from his addiction. In about seven months he was bandless and homeless, abandoned by Speedealer on a street corner in San Francisco. From there he took a plane back to Holland in another feeble attempt to geographically remove himself from his addictions. A couple of weeks prior to meeting Davies he had been convinced by some Dutch friends to take a CD he had recorded in Holland to some industry friends in Los Angeles. He arrived in Los Angeles only intending to stay one month. Within a week of meeting Daniel they were inseparable friends living in a one room apartment in Laurel Canyon, drinking two fifths of vodka a day, smoking as much crack as their other friends could afford. After only a month of ?friendship' Daniel and Rich went to Music Cares Foundation and asked for help with their addictions. They were placed into CRI-Help rehab. They spent a month there together. They then spent six months in a sober living halfway house. They finally moved out back into the world, sober, in December 2003.

Eleven months later Daniel and Rich saw drummer Brad Hargreaves play live at the Scene Bar in Glendale with a band called Hours and Minutes. They were extremely impressed with his musicianship. They got his phone number and asked him if he wouldn't mind ?jamming'. They had no idea Brad was already a member of the eight times platinum selling group Third Eye Blind. Remarkably, Third Eye Blind had just played the Kinks on the NBC show American Dreams. Hargreaves, upon learning that Daniel's father was Dave Davies, became intrigued and agreed to try a couple of practices. The trio instantly bonded and Year Long Disaster was born.