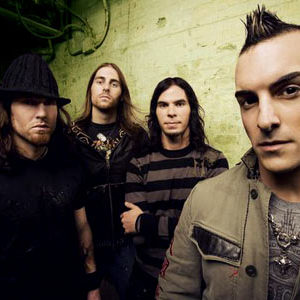 Rev Theory (formerly known as Revelation Theory) is an American hard rock band from North Andover, Massachusetts. Formed in 1997, they released their debut album, Truth Is Currency, on EMI subsidiary Element Records in 2005. They are currently signed to Interscope Records. Revelation Theory's members first met in 1997 at Merrimack College in North Andover, and all moved to New York City in 2001 hoping for a career as a band.

Revelation Theory's members first met in 1997 at Merrimack College in North Andover, and all moved to New York City in 2001 hoping for a career as a band.

In 2002, bassist Matty, a student at New York University, completed the quartet. They recorded a demo EP and began touring; in 2005 they were tapped for the Girls Gone Wild Rocks America tour in 2005.

The group signed to EMI subsidiary Element Records, releasing a full-length, Truth Is Currency, in 2005 and opening on tour with Breaking Benjamin and Fall Out Boy.[1] A single from Truth Is Currency, "Slowburn", hit #27 on the US Mainstream Rock Tracks chart in 2005.

They toured the US with Saliva and Evanescence in 2006 and also toured Europe with Evanescence. In 2007, the band toured with Hinder, Papa Roach, and Buckcherry.

The now renamed Rev Theory is currently in the studio recording their sophomore album with new label Interscope Records entitled Light It Up. The release date is scheduled for June 10, 2008. Their upcoming single "Light It Up" was one of two official theme songs for World Wrestling Entertainment's WrestleMania XXIV pay-per-view event. Patrick D won the "Light It Up" contest & introduced Rev Theory on stage at Thunder Field during Wrestlemania weekend. "Hell Yeah" is the official theme song for WWE One Night Stand 2008[5]. Together, WWE and WJRR have put together an exclusive widget to promote the event. Former WWE Diva Ashley Massaro appears in the music video for "Hell Yeah." The song has also become known for being the intro song for the Detroit Red Wings hockey team as well as the Cartoon Network sporting event, SlamBall (Censored as Hey Yeah).

Rev Theory have recently announced their tour with Flyleaf and Seether.

We Own The Night (CDS)

Acoustic Live From The Gibson Lounge