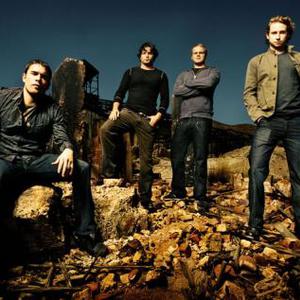 Trapt is an alternative band from Los Gatos, California. The band formed in 1995, after meeting in high school, with members: Chris Taylor Brown (vocalist), Simon Ormandy (guitarist), Peter Charrell (bassist) and David Stege (drummer) and recorded the albums 'Amalgamation' and 'Glimpse' to sell at local shows. After several rehearsal absences and negative feedback the band decided to let David go. While attempting to find a suitable replacement, the band signed to Warner Bros. Records and began recording their debut self-titled album.

The band enlisted Robin Diaz, to perform drums on the record, and in turn Robin, helped the band find their permanent drummer, Aaron Montgomery.

On November 22nd, 2002, the band released Trapt, along with the single "Headstrong". "Headstrong" became a fantastic hit, reaching #1 on alternative charts and #16 on pop. Follow-up singles "Still Frame" and "Echo" (with a video featuring Michelle Trachtenberg) did respectably, although they never reached the heights of "Headstrong". "Headstrong" became the official theme song of WWE Bad Blood for June 2003. Trapt eventually hit platinum. After more than one year an EP followed on March 30th, 2004, that included a new song called "Promise" along with live versions of "Made Of Glass" and "Echo".

On September 13th, 2005, the band released their sophomore album "Someone In Control" along with the single "Stand Up". "Stand Up" failed to do as well as any of their previous singles, although it still made an excellent run on active rock stations. "Waiting" and "Disconnected (Out Of Touch)", were also released as singles, and have yet to repeat the success of any of Trapt's self-titled radio hits. The band spent the first half of 2006 co-headlining with Shinedown as part of the Equinox Tour.

A live album was released in September, 2007, containing live tracks from both previous albums with new studio tracks "Stay Alive" and "Everything to Lose".

Trapt hit the studio in July 2007 to begin recording their 3rd album, which was released on 5th August 2008 named "Only Through the Pain...".

Trapt announced in late fall/early winter 2009 they were working on a new album for summer or fall release in 2010. On July 20, 2010, Trapt released their first single "Sound Off," for the upcoming album "No Apologies," due out in stores October 12, 2010. Updates, along with an EPK, for the upcoming album is available on their Facebook, Twitter, and YouTube (officialtrapt) accounts.

Only Through The Pain