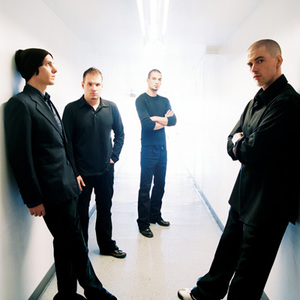 Hailing from Ann Arbor, Michigan, Taproot formed in late 1997, and has toured with Deftones, Sevendust, Incubus, and Korn. Taproot's album "Blue Sky Research" was released on 16 August 2005. Their song "Calling" was the official theme song of WWE's Unforgiven pay-per-view event in September 2005. The second single from the album, "Birthday," received minimal radio airtime on the East Coast. In 1997, Taproot sent their demo to Limp Bizkit frontman Fred Durst. Impressed with their material, he offered to get them a recording contract through Interscope Records.

In 1997, Taproot sent their demo to Limp Bizkit frontman Fred Durst. Impressed with their material, he offered to get them a recording contract through Interscope Records. However, after extended negotiations, Taproot looked elsewhere, where they finally landed a lucrative record deal with Atlantic Records. Durst heavily cursed the band on vocalist Stephen Richards' answering machine. He also put some blame on System of a Down, who assisted Taproot in securing the Atlantic deal. In retaliation, Durst also kicked System of a Down off the 1999 Family Values Tour, replacing them with Staind. Taproot later went on to independently release three albums: ...Something More Than Nothing (1998), Mentobe (1998) and Upon Us (1999).

The band released their debut album Gift on June 27, 2000. With the album's lead single "Again & Again" gaining heavy exposure through MTV2, the band's mainstream rise gained momentum. With the help of Ozzy Osbourne's son Jack, Taproot landed a spot on the second stage of the 2000 and 2001 Ozzfest tour.

After spending seven months in Los Angeles, the band released their second album Welcome on October 15, 2002. Considered to be a more melodic effort, the album debuted at #17 on the Billboard 200, selling over 51,000 copies in its first week of release. Much of this was due to the success of the album's first single, "Poem", which shot to #5 on the Mainstream Rock charts. The album's second single, "Mine", followed with more moderate success. Welcome is Taproot's most successful album to date, almost achieving gold status, with approximately 475,000 copies sold. After touring across the country on Disturbed's Music as a Weapon Tour, as well as a European tour, the band took a two-year break.

Returning from their break, the band released their third major album Blue-Sky Research on August 16, 2005. Billy Corgan (The Smashing Pumpkins frontman) assisted in songwriting on the album, which was produced by Toby Wright. It debuted at #33 on the Billboard 200, with approximately 28,000 first week sales. The Bands single "Calling" was used by the WWE 2005 pay-per-view "Unforgiven."

The band headlined a major tour with Evans Blue and From Satellite to promote its release. Prior to the headline tour, Taproot acted as direct support to Chevelle on their tour alongside 30 Seconds to Mars. They also participated in the Fall Brawl Tour, which featured Staind and P.O.D. as headliners, and is notable for taking the then-unknown Flyleaf along as the opening act for the three bands.

On May 23, 2006, it was reported that Taproot had parted ways with Atlantic Records, after disappointing sales of Blue-Sky Research. At the time, the album had sold 112,000 copies since its release. On June 13, 2006, drummer Jarrod Montague, via Taproot's MySpace blog, confirmed the news.

On March 5, 2007, the band confirmed that they were in the process of recording their new album with producer Tim Patalan. According to Philip Lipscomb's MySpace blog, their new album Our Long Road Home is complete and will be released sometime in early 2008. On March 2, 2008, the band released a song from Our Long Road Home entitled "You're Not Home Tonight" on their website. This song has been played on XM Satellite Radio, Squizz 48 Indicent Exposure with Grant Random Sirius Satellite Radio on Octane. A teaser trailer for Our Long Road Home was added to the Taproot Youtube page on April 28, 2008. At the end of the video, it was stated that the album would be released on August 5, 2008.

According to the Taproot website, the band has decided to forgo signing to a major label. Their new album Our Long Road Home will be released independently through their management firm Velvet Hammer Music in a 50/50 partnership with the band themselves. Distribution was handled with Sony-owned RED Distribution.

Our Long Road Home was released on September 16, 2008. The disc was distributed in a cardboard sleeve and released to all major outlets. Just over a week after the album's release, it was announced that long-time drummer Jarrod Montague would be leaving the band and replaced by Nick Fredell. The band released a statement regarding the change in lineup:

""After 10 years of touring, our drummer and good friend Jarrod will be sitting out this cycle and we will be replacing him with our long time friend Nick Fredell. We'll miss Jarrod's presence out on the road, but Nick has fit in perfectly and we're excited for all of our fans to meet him. Jarrod's still very much a part of our family, so you'll be seeing him in press and the "Wherever I Stand" video which is out now on Youtube..."

In Spring 2009, Taproot went on the road with Dear Enemy and AdaKain for the Take It! tour. Later that year, they co-headlined a U.S. tour with Cold, in addition to releasing the following statement: "Taproot has a few upcoming shows in November and December and will start writing their new record in January/ February of 2010. We hope to get into the studio sometime in February and March. We will be looking at a release date sometime in the late spring possibly early summer of 2010!"

After a brief period without a record label, Taproot signed with Victory Records. On April 1, 2010, at midnight, the band released the lead single for their upcoming album. The song was "Fractured (Everything I Said Was True)". A video for the song followed the release soon after debuting on the band's Youtube channel on April 16. Soon after, the band released their 7th studio album Plead the Fifth.