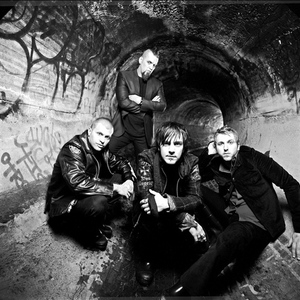 Three Days Grace is a Canadian rock band, formed under the name Groundswell in Norwood, Ontario, Canada in 1992. After a breakup in 1995, the band reformed in 1997 under its current name and with a line-up consisting of guitarist and lead vocalist Adam Gontier, drummer and backing vocalist Neil Sanderson, and bassist Brad Walst. In 2003, Barry Stock was recruited as the band's lead guitarist. After signing to Jive Records, Three Days Grace released two studio albums...

After signing to Jive Records, Three Days Grace released two studio albums, Three Days Grace in 2003 and One-X in 2006, both of which have been certified platinum and double platinum in the US and Canada, respectively. In 2007, the band was declared number one rock artist of the year by Billboard and was the number four artist in airplay in Canada that same year. The band's third album, Life Starts Now, was released on September 22, 2009.

In 1997, after being disbanded for two years, the band regrouped in Toronto as a trio consisting of Gontier, Sanderson, and Walst. They also changed their name to "Three Days Grace". According to Gontier, the name stands for the question: If you had three days to change something in your life, could you do it? Once in Toronto, the band became acquainted with local producer Gavin Brown. The band gave him several years of material that they had created since forming, and he "picked out what he called 'the golden nuggets'", according to Gontier. Brown and the band polished the songs into a demo album which they gave to EMI Music Publishing Canada. The record label wanted to hear more material, and with Brown producing, the band created the song, "I Hate Everything About You", which attracted the interest of several record labels. The band was soon signed to Jive Records after being sought out by the company's president.

After being signed to Jive, the band moved to Long View Farms, a studio in Boston, to record their debut album. The self-titled album was finished in Woodstock, New York and released on July 22, 2003. It was met with generally favorable reviews. Dave Doray of IGN said of the album, "Mistakes? There's not many." Allmusic reviewer Heather Phares said that on Three Days Grace, "the band's focus and adherence to alt-metal's formulas ? coupled with tight songwriting and some unexpectedly pretty choruses ? results in a strong tracks that are more memorable than the work of many of their peers". She did criticize the album for its simplicity, concluding, "Three Days Grace are definitely one of the most accessible alt-metal bands of the 2000s; they just need to add some more distinctiveness to their sound."

After acquiring lead guitarist Barry Stock in late 2003, Three Days Grace toured continuously and extensively for almost two years in support of their major label debut. The album peaked at number nine on the Canadian Albums Chart and number 69 on the Billboard 200 and was certified platinum in the US by the RIAA in December 2004 and double platinum in Canada by the CRIA.

While touring in support of Three Days Grace, Gontier became depressed and addicted to drugs and alcohol. He went into rehab after the band finished touring, and while there, began writing material for the band's second album. After leaving rehab, he rejoined the band in a cottage in Ontario to finish writing material for the album. In a 2006 interview, Gontier said that the album's material was more personal to him than the band's previous release, being based on the despondence, drug abuse, and rehab that constituted the past two years of his life. The album, titled One-X, was then released on June 13, 2006, and was guitarist Barry Stock's recorded debut.

One-X was met with generally favorable reviews. The Toronto Star complimented the album with a review title of "One CD worth buying..." and focused on its lyrics, saying, "The lyrics really speak out to you, especially if you're going through a tough time in your life." Allmusic reviewer Corey Apar praised the music, saying it "remains catchy despite its lyrical darkness". The album did receive some negative criticism. Apar pointed out that Three Days Grace is "hardly innovative" in their approach to writing music and that "further distinctive qualities" would help the band separate itself "from their alt-metal peers".

One-X peaked at number two on the Canadian album chart and at number five on the Billboard 200, selling 78,000 copies in the US in its first week of release. Its first single, "Animal I Have Become", was Three Days Grace's most successful, becoming 2006's most played rock song in Canada, and the album helped propel Three Days Grace to become the number one rock artist in airplay in the US and Canada in 2007, with Billboard ranking them as the number one rock artist of the year in 2007. One-X was certified platinum by the RIAA in the US on August 30, 2007, and double platinum by the CRIA in Canada in July 2007. Three Days Grace toured the US and Canada throughout the second half of 2006 and all of 2007 in support of One-X. In early 2008, they toured alongside Seether and Breaking Benjamin across the US

Three Days Grace have planned a tour of the US and Canada encompassing the latter part of 2009 and supporting Life Starts Now.

Three Days Grace's musical style has generally been described by critics as alternative metal and hard rock throughout the band's career. Heather Phares of Allmusic, in a review of the band's debut album, compared them to rock bands Chevelle and Helmet. Dave Doray of IGN described Three Days Grace as "heavy and catchy, with chewy chunks of assurance and fury thrown in for added measure." Allmusic's Corey Apar said One-X brings an "accessible alt-metal attack of blunt lyrics and crunching rhythms" that retains the melodic sound of its predecessor "despite its lyrical darkness".

Somebody That I Used To Know (CDS)

You Don't Get Me High Anymore (CDS)

I Am Machine (CDS)