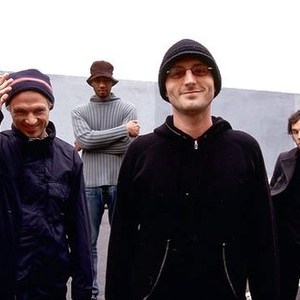 Remy Zero is an Birmingham, Alabama based alternative rock band made up of Cinjun Tate (vocals, guitar), Shelby Tate (vocals, guitar, keyboards), Gregory Slay (drums,perc,keyboards), Cedric LeMoyne (bass, guitars), and Jeffrey Cain (guitar, pianos, sounds). Before recording any full length albums, Radiohead found their demo tape and invited them to be part of the US tour for The Bends. After that, they moved from Birmingham, Alabama to Los Angeles, California to record their first album. Several band mates suffered from substance abuse and homelessness after moving from Alabama.

Before recording any full length albums, Radiohead found their demo tape and invited them to be part of the US tour for The Bends. After that, they moved from Birmingham, Alabama to Los Angeles, California to record their first album. Several band mates suffered from substance abuse and homelessness after moving from Alabama.

Their first album, self-titled, drew from these experiences and unfortunately received little recognition or sales. The subsequent album Villa Elaine caused them to be praised as "the next big thing". Villa Elaine was recorded when the band was living in an apartment of the same name in Hollywood. Remy Zero's third album The Golden Hum was also received well. A 30 second clip of the song "Save Me" from The Golden Hum was used as the theme song for WB's Smallville. Remy Zero's music has also been on KCRW's Morning Becomes Eclectic radio show. Most recently Remy Zero's song "Fair" from Villa Elaine was used in the film Garden State, and "Prophecy", also from Villa Ellaine was used in The Last Kiss. In 2003 Jeffrey Cain, Cedric LeMoyne, and Gregory Slay formed The Engine Room and wrote the theme song to the television show Nip/Tuck titled "A Perfect Lie" which was nominated for an Emmy Award.

Remy Zero broke up after making The Golden Hum and many of its members have joined new bands. Shelby and Cinjun Tate have created Spartan Fidelity, Jeffrey Cain has formed Isidore with Steve Kilbey of The Church and recorded a solo album under the name Dead Snares,Gregory Slay has recorded multiple albums as Sleepwell, and Cedric LeMoyne has collaborated with Orenda Fink of Azure Ray on an album set for release in early 2009.

In 2006 there was reason to believe, from their MySpace posting, that the group was attempting to reform. However, as of Summer 2007, the Remy Zero MySpace page showed the following statement: "The story so far: We formed in Birmingham, AL in 1989. We took a break in 2003. We thought momentarily that we might start making music again, but now... who knows. We'll keep you posted here on whatever we're doing - together or separately - as much as we can. Stay tuned...". The Remy Zero website now has the following message:
"The five of us thank all of you who have listened, & had faith in us.
These years as Remy Zero have given birth to music and friendships that will hopefully live on past this moment. We will take the inspiration, lessons, and spirits we have encountered as each of us moves forward into new territories. Remy Zero has been put to rest.
thank you again
peace,
cedric, cinjun, jeffrey, gregory, shelby".