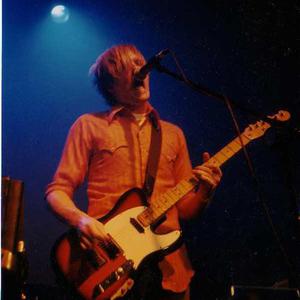 Abandoned Pools is the performing name for singer-songwriter and musician Tommy Walter, as well as the name of the band in which he plays. He began playing music at a young age, first with the bass guitar and then the French horn. He attended University of Southern California, followed by the Pacific University. Teaching classical music theory, Walter began working with various Los Angeles-area musicians.

Walter soon began working with a singer-songwriter who went by E and drummer Butch Norton as The Eels. After a promising debut, Walter left the band due to differences with E. He formed a short-lived band, Tely, who released a CD that was distributed on the internet. He was also in the touring band for the Ken Andrews solo project ON, though in the end the band saw little touring. Later he went on to form Abandoned Pools and recorded a solo album, Humanistic, in 2001. Humanistic actually features a couple of songs that were once performed by Tely, like "Start Over."

In 2002 they performed the theme song for the short-lived MTV animated series Clone High. Many of their songs can be heard in the background during the show.

Walter teamed up with drummer Bryan Head and guitarist Sean Woolstenhulme in 2004 to record "Armed to the Teeth," the follow up to Humanistic. In June of 2005, they released an EP, consisting of a few songs from the new album along with b-sides and demos, called The Reverb EP. This was followed by the full album in September 2005.

In January of 2006, Walter wrote in his blog that Universal Records had stopped promoting the album. However, he has included several song snippets on his MySpace and has said he is writing songs for a new album.

In March of 2010, Walter announced via Twitter that he would enter the studio to work on a third Abandoned Pools album after five years of hiatus.

In mid-May 2011, via the Abandoned Pools' MySpace page, two new songs, "Marigold" and "In Silence" from the upcoming album, "Sublime Currency" were made available for streaming and download, or iTunes, as well as a full length demo of the first album, "Humanistic." The third studio album was expected to be released in late 2011, but is now due out sometime in 2012. On Friday, January 27, 2012, the Abandoned Pools' Facebook page posted: "Announcement coming on Monday." (January 30th)

Armed To the Teeth