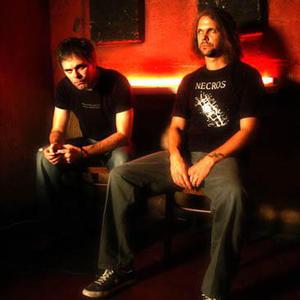 Local H is an alternative rock band which formed in 1987 in Zion, Illinois, United States. The band originally consisted of Scott Lucas (vocals, guitar, bass) and Joe Daniels (drums). Daniels left in 1999 and was replaced by Brian St. Clair. They are perhaps best known for their 1996 hit single "Bound for the Floor". Each year, critics at the Chicago Tribune name a "Chicagoan of the Year." The 2008 winner for music was Local H.

Each year, critics at the Chicago Tribune name a "Chicagoan of the Year." The 2008 winner for music was Local H.

Local H started as hard-rock duo formed by Scott Lucas (vocals/guitar/bass) and Joe Daniels (drums). The two began in 1987 at their mainline high school in Zion. After failed attempts at recruiting a bassist, Lucas added bass pickups to his electric guitar.

Local H's 1995 debut Ham Fisted was released to mediocre reviews. Their 1996 follow-up As Good as Dead was certified gold and contained the hits "Bound for the Floor" and "Eddie Vedder." It was better received by critics, as was 1998's Pack Up the Cats, which spawned the single "All the Kids Are Right." Unfortunately, their label Polygram merged with Universal, and the album was all but forgotten in transition.

Daniels left in 1999. Lucas recruited recent Triplefastaction drummer Brian St. Clair later that year. St. Clair was a drum tech for Bun E. Carlos of Cheap Trick. Lucas and St. Clair released their first album together, Here Comes the Zoo, in 2002 on Palm Pictures. The No Fun EP came next in 2003, and Whatever Happened to P.J. Soles? followed in 2004 to favorable reviews.

Local H garnered good publicity for a cover of the Britney Spears hit "Toxic". The cover was available on the band's web site and is the last track on the otherwise live album Alive '05, issued in 2005. "Toxic" has been performed at recent concerts.

Local H is known for creativity in concerts. In 2003, the band auctioned off a concert on eBay, and in 2004, performed at Fritz's Corner in Zion. In 2005, the duo performed a series of set-list request shows, where the audience got to vote on what they wanted the band to play. Gabe Rodriguez often accompanied the band on tour and provided back-up vocals or kazoo playing.

Every Halloween, Local H plays in Ardmore, masquerading as a certain group. They have performed as Nirvana, Tom Petty, Oasis, The Doors, Led Zeppelin, and Sex Pistols.

The Another February (EP)