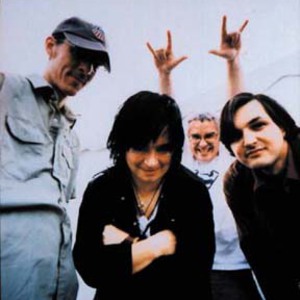 Toadies are an alternative rock band from Fort Worth, Texas. The band's best known lineup consisted of Vaden Todd Lewis (guitar, vocals) Mark Reznicek (drums), Lisa Umbarger (bass), and Clark Vogeler (guitar). When the band reformed in 2006, Umbarger amicably declined to participate and has been replaced by Doni Blair. They are best known for the hit single "Possum Kingdom," from their album Rubberneck. This song was named after Possum Kingdom State Park, in Palo Pinto County, Texas.

The band formed in 1989. Toadies officially disbanded in 2001, although they had farewell concerts in 2002. The band reformed for a reunion show on March 11, 2006, headlining the Greenville Ave St. Patrick's Day parade concert.

Toadies toured extensively throughout the 1990s, opening for such artists as Red Hot Chili Peppers, White Zombie, Bush, and The Butthole Surfers. They also headlined and co-headlined tours with acts such as Brutal Juice, Baboon, Supersuckers, and The Reverend Horton Heat.

The primary reason for the breakup of the band was that Lisa Umbarger simply did not want to be a part of it anymore, and bandleader Todd Lewis felt that the band could not continue without her.

Since disbanding, members of the band have gone on to other projects. Todd Lewis is now in The Burden Brothers and Mark Reznicek is now in Eleven Hundred Springs.

Toadies reunited for 4 shows in Texas in March 2007. They played one show in Dallas, one in Houston, and two shows in Austin at Stubb's BBQ. All of the shows sold out shortly after they went onsale.

Toadies reunited for good in 2008, releasing their new album, "No Deliverance" on August 15th 2008.
In June 2010 it was announced that Feeler, the follow-up album to Rubberneck that was shelved by Interscope, would finally be seeing a release. Todd Lewis was quoted as saying: "Since there are unfinished versions floating around on the Internet, it is important to us that people hear it as we meant it to be." The album was released on July 20, 2010

You Are Not Alone (CDS)

The Lower Side Of Uptown

Best Of Toadies - Live From Paradise