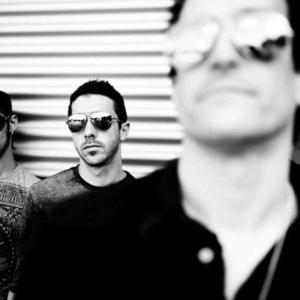 Filter (stylized as FILTER) is an alternative rock group formed in 1993 in Cleveland, Ohio by Richard Patrick and guitarist/programmer Brian Liesegang, who later left the band in 1997 to form Ashtar Command with Chris Holmes. Filter has released five studio albums Their first album, Short Bus, was released in 1995. The album was commercially successful, and included the hit single "Hey Man, Nice Shot".

Their first album, Short Bus, was released in 1995. The album was commercially successful, and included the hit single "Hey Man, Nice Shot". The song was somewhat controversial, as it was seen as capitalizing on the public suicide of Budd Dwyer. Kurt Cobain's suicide was widely rumored to have inspired the song, but the band refuted this. In need of a live band to tour the album, Patrick and Liesegang recruited Geno Lenardo on guitar, Frank Cavanagh on bass, and Matt Walker on drums. They would all later be featured in the video for the album's second single, "Dose".

Between Filter's first and second albums, the band became known for their soundtrack contributions, The first of these tracks, "Thanks Bro", landed on the Songs In The Key Of X: Music From And Inspired By The X-Files album. In 1996, Filter recorded and filmed the video for the song "Jurassitol", for The Crow: City of Angels soundtrack. They also released the home video Phenomenology in 1996, which showcased some of the band's live performances and music videos, as well as an interview with Patrick and Liesegang filmed in New Mexico.

Liesegang left in 1997 shortly after recording the Filter/The Crystal Method collaboration "(Can't You) Trip Like I Do" for the Spawn movie soundtrack, due to creative differences with Patrick. In 1998, for the X-Files film soundtrack, Patrick decided to keep the Filter name and recorded a cover of Harry Nilsson's "One".

Patrick continued with 1999's Title of Record with returning members Lenardo and Cavanagh, as well as Steve Gillis on drums, filling in the gap left by Walker after he left to work with The Smashing Pumpkins. Title of Record moved away from industrial rock somewhat, and resulted in the band's biggest hit, the mellow ballad "Take a Picture", along with other lesser-heard singles "Welcome to the Fold" and "The Best Things". The song "Take a Picture" is about a dispute on an aircraft, when Richard Patrick drunkenly stripped down to his boxers, alarming the other passengers.

The song "Captain Bligh" (after Vice-Admiral William Bligh of the HMS Bounty) was written by Patrick after leaving Nine Inch Nails and was about Trent Reznor's notoriously anti-social habits. "Miss Blue" is said to have been about Smashing Pumpkins bassist D'arcy Wretzky. She can be heard on the songs "Cancer", and "Take A Picture".

2002 saw the release of The Amalgamut, featuring the singles "Where Do We Go from Here?" and "American Clich?". "The Only Way (Is the Wrong Way)" was also featured in the first wave of Hummer2 commercials that year and in the 2003 movie Tomb Raider: The Cradle of Life. Alan Bailey was recruited for live guitar when they set off to tour the album; however, the tour ended abruptly in a matter of weeks when Richard Patrick voluntarily checked himself into rehab. He has since tattooed his date of sobriety, September 28, 2002, on his forearm.

Richard Patrick was part of the supergroup The Damning Well, which has only released one track on the Underworld movie soundtrack in 2003, despite an entire album's worth of recording. While nothing has directly surfaced, it is rumored that some of the material from these sessions have been an influence or has been reworked in Filter's 2008 release Anthems For The Damned and Black Light Burn's first album Cruel Melody, due to the fact that Wes Borland was the guitarist of both The Damning Well and Black Light Burns.

Army Of Anyone, a second supergroup side-project with drummer Ray Luzier and Stone Temple Pilots members Robert and Dean DeLeo, released its debut album on November 14, 2006. Low album sales, coupled with Richard Patrick's desire to do more work with Filter, led the band's break-up around mid-2007.

As Army of Anyone wound down, Patrick began working on material for a new Filter album, to eventually be titled Anthems for the Damned. Released to the public in May 2008, it was more serious in tone than some expected and expressed more of his mixed emotions regarding the state of the world and the state of his life.

On March 7, 2008, it was announced that Frank Cavanagh had reunited with Filter and would play as a live member at the Operation MySpace concert in Kuwait. It was confirmed at Operation MySpace that he would not be joining Filter on the full tour as he would be shipping off to Iraq in April. The only song played live during the March 10 performance by Cavanagh, now a Sergeant and Paralegal in the U.S. Army Reserve, was the band's first mainstream hit, "Hey, Man, Nice Shot".

A greatest hits album entitled The Very Best Things (1995-2008) was released March 31, 2009. It featured tracks from all four previous studio albums and various movie soundtrack contributions, but no new content. There are 14 tracks total, with some tracks being radio edits.

Filter started work working on a fifth album shortly after the release of the remix and greatest hits albums, with Bob Marlette as a producer. The album, said Richard Patrick, would be a lot heavier than Anthems for the Damned and was to have a song written for The Amalgamut on it. He also stated he would be moving away from the political lyrical content present in Anthems for the Damned.

When asked about the direction of his upcoming music style in an interview with Suicide Girls on September 13, 2008, Patrick said, "Actually the stuff I'm writing right now for a record that I'm going to release sometime next year is actually way more heavy industrial, more electronic. There's probably not going to be that many live drums on it." It's important to note that he originally saw this album releasing in 2009, while it has now obviously slipped into 2010.

Richard Patrick has stated on the Filter website that he has been recording songs for movies recently. Filter covered the song "Happy Together" by The Turtles for the soundtrack to the movie The Stepfather (2009). The song features ambient sound with alternative metal.

Filter also contributed a new song "Fades Like a Photograph" for the soundtrack of the movie 2012 (2009). The song has a similar lyrical mood to "Take a Picture" and saw Patrick reuniting with former Filter co-conspirator, Brian Liesegang, who co-produced the track.

Through the end of 2009 and into 2010, Filter released a series of fourteen studio updates chronicling the progress made on the album. Each update touched on a certain part of the album process, such as "recording guitar parts" or "mixing the album". The last studio updates confirmed that the album recording had been completed. In their last studio video update, Richard Patrick showcased two clips from final mixed songs on iTunes that listed track listing and track lengths. While the video was legitimate, it was not the actual final track list, it was only a collection of new Filter songs on a playlist.

The album has been recorded, mixed and mastered, and band is currently signed with the label Rocket Science Ventures. Filter released a new single, "The Inevitable Relapse", as their first single on May 26th. The song is available on the band's official website as a free digital download. The Trouble With Angels will be released in August 17, 2010, with touring starting in the summer. The second track on the album, titled "Drug Boy," was released on the band's website on August 3rd.

For The Beaten (CDS)

The Sun Comes Out Tonight

The Trouble With Angels

Remixes For The Damned

Anthems For The Damned