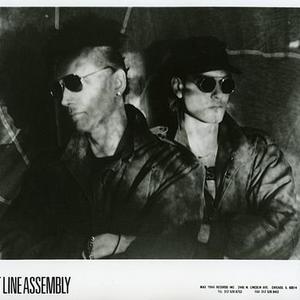 Front Line Assembly are Bill Leeb (vocals, synthesizers) and Rhys Fulber (synthesizers and samplers), one of many groups formed by the prolific Vancouver, Canada-based duo. After working in the mid-'80s under the pseudonym Wilhelm Schroeder with Skinny Puppy, the Austrian-born Leeb formed the industrial/ebm-based Front Line Assembly in 1986 with Fulber -- who initially joined on as a studio assistant -- and synth player Michael Balch.

After a handful of compilation appearances and cassette-only releases, Front Line Assembly issued its first three full-length efforts -- The Initial Command, State of Mind, and Corrosion -- on a monthly basis between December 1987 and February 1988. Later in 1988, Corrosion was reissued, along with a subsequent mini-album titled Disorder and a number of exclusive bonus tracks, as Convergence.

In 1989, the group returned with the album Gashed Senses & Crossfire, which contained the dance-flavored singles "Digital Tension Dementia" and "No Limit." A European tour in support of the record yielded a live album -- titled simply, Live -- that was released and deleted on the same day in a limited edition of 4,000 pressings. After Balch departed Front Line Assembly in 1990, Fulber stepped in as a full partner; the streamlined duo soon released the electro-styled album Caustic Grip, while 1992's Tactical Neural Implant found the group's music moving in a more hard-edged disco direction. By 1994, the sound evolved yet again, with the album Millennium displaying a newfound reliance on guitars; both the title track and "This Faith" scored as club hits. Fulber departed the lineup by 1997, while his replacement Chris Peterson debuted with 1998's Flavour of the Weak. A best-of/remix compilation, Monument, was released the same year, as well as Re-Wind, a re-mix collection of material from Flavour of the Weak. Implode appeared one year later. Sticking with a heavy dose of synth-pop trance and throbbing melodies,Leeb and Peterson issued Epitaph in fall 2001.

Once again re-united as FLA, Bill And Rhys released a killer single 'Maniacal' (2003) as a precursor to the new album 'Civilization' (2004) and the sighs of relief amongst FLA fans were audible across the globe. 'Maniacal' is good old-fashioned FLA bought up to date whilst B-side 'Anti' shows that messers Leeb and Fulber can still produce stark and dark Industrial.

For the first time, Bill Leeb, Rhys Fulber, and Chris Peterson have joined ranks. The trio, with new members Jeremy Inkel and Adrian White, began work on Artificial Soldier in early 2005, and it was time well spent. Just release in June 2006 the newly re-formed line-up managed to create a release that should live up to the expectations of Front Line Assembly fans. Heavy pounding beats, atmospheric strings, percolating melodies, dynamic synths and Bill Leeb's trademark vocals are the norm here. Two guest vocalists also appear on Artificial Soldier. Eskil Simonsson from Covenant (on ?The Storm?) and Jean-Luc De Meyer from Front 242 (on ?Future Fail?).

Wake Up The Coma

Shifting Through The Lens (CDS)

Shifting Through The Lense (CDS)