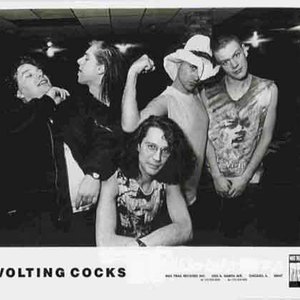 Revolting Cocks, also known as RevCo, are an American industrial rock band that began as a musical side-project for Belgian musicians Richard 23 (Front 242) and Luc Van Acker with Ministry's Alain Jourgensen in 1985. The first release was No Devotion on Wax Trax records. Losing Richard 23 after some creative differences, the group's remaining two members were augmented by a rapidly changing set of musicians centered around Chris Connelly (Fini Tribe, later a solo career and Damage Manual), Paul Barker (Ministry)...

Losing Richard 23 after some creative differences, the group's remaining two members were augmented by a rapidly changing set of musicians centered around Chris Connelly (Fini Tribe, later a solo career and Damage Manual), Paul Barker (Ministry), Duane Buford, and Bill Rieflin (who is now playing for REM), with around twenty others as irregular contributors or guest artists.

The single was quickly followed by an album Big Sexy Land in 1986, followed by a live album You Goddamned Son of a Bitch in 1987 and Beers, Steers, & Queers in 1989. After a hiatus, Linger Ficken' Good, was released in 1993 - this would be Revolting Cocks' last album for over 10 years.

The first album was a mix of industrial, dance and techno, with sampling and strong synthesized beats dominating. The live album, with the change in personnel, featured a return to Ministry-like industrial - the Big Sexy Land tracks embedded in shouting and noise. This trend continued on Beers, Steers, & Queers, layering sample over sample and pushing ever further into distortion. Linger Ficken' Good was released by Sire records and is a tamer affair, most tracks returning to the less layered material and only occasionally producing Ministry noise. Included was a cover of Rod Stewart's Do Ya Think I'm Sexy, also released as a single.

In 2004, the band released iterations of Prune Tang to disappointing responses from fans. An album titled Purple Head was due in 2004, but was delayed until 2006 with a change in title to Cocked & Loaded. The first single, Caliente (Dark Entries), a cover of sorts of Dark Entries, with vocalist Gibby Haynes, was featured on the soundtrack to Saw II in 2005.

The Revolting Cocks are also known for their perverse lyrics and raunchy live shows. Due to their content, they were a target for angry moralists in the late '80s/early '90s. In the mid '80s, their song "No Devotion" was put on the PMRC's "banning list", and in 1990, Britain's Home Secretary Douglas Hurd tried to stop the band from performing in the UK by refusing them work permits. They have also been offensive to the songwriters/performers in which they chose to cover and satire, such as Olivia Newton-John and Rod Stewart (though the former denied them permission entirely to perform their work outright).

The origin of the group's name is uncertain. One story claims that the name was the result of the original lineup participating in a night of extremely heavy drinking, which resulted in a bar owner throwing the drunk group out and calling them a bunch of revolting cocks.

You Goddamn Son Of A Bitch: Live At The Metro Chicago A/B