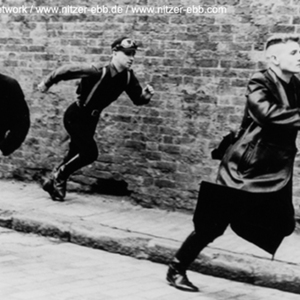 Formed in Chelmsford when main protagonists Douglas McCarthy (vocals) and Bon Harris (drums, programming) were just 15, Nitzer Ebb cut a dynamic swathe through the electronic music and Balaeric beat scenes of the 1980s and 90s. They were electro-punks before the genre even existed, at a time when The Prodigy were not even a gleam in fellow Essex boy Liam Howlett's eye. Militaristic, intimidating yet always accessible, Nitzer Ebb enjoyed a string of ferocious club hits and released five critically acclaimed albums on Mute.

From their first-ever single, 1984's 'Isn't It Funny How Your Body Works' through to their final 1995 single 'I Thought', they were a band whose honed aggression, originality and precision were impeccable.

The band's musical adventures first began in 1982 when McCarthy and Harris, along with drummer David Gooday, formed the group whilst still at school in Chelmsford. Listening to the likes of Abw?rts, Neubauten, Malaria, DAF, Cabaret Voltaire, Killing Joke and Bauhaus among many others the boys began experimenting with synthesizers and samples culminating in the release of four singles on their own Power Of Voice Communications label (a joint venture with Pet Shop Boys producer Phil Harding) before Daniel Miller was impressed enough to sign them to his own label Mute.

Nitzer Ebb's debut album, 1987's brooding 'That Total Age', displayed a brutalist yet polished ?lan. Following the powerful opening singles 'Murderous' and 'Let Your Body Learn', the band's club reputation was truly secured with the release of 'Join In The Chant', which in a version remixed by Phil Harding, became a staple in Britain's acid house and techno clubs.

Having won over club-land the band turned their attentions to the live arena and at the invitation of label mates Depeche Mode, supported them on their huge Music for the Masses tour. Meanwhile original drummer Gooday departed to be replaced for live performances by Julian Beeston, whilst McCarthy and Harris returned to the studio with producer, Flood, to record the follow up to 'That Total Age' for the album that would eventually become 'Belief' and set in progress a highly creative partnership that would extend over four albums.

The new album once again retained the musical and visual aggression of their previous work. Yet 'Belief' also hinted at the band's growing ability to display a sense of wit, imagination and sheer caustic comment within their music. There were no sacred cows in terms of subject matter or indeed the band's merciless capacity for piss taking.

Upon its release 'Belief' not only attracted much domestic critical praise but also saw their stock rise in Europe. In part this was aided by the series of remixes provided by the band for the singles 'Control I'm Here', 'Hearts & Minds' and 'Shame'. Along with additional mixes by William Orbit they helped maintain the band's popularity in the clubs and encourage the burgeoning fascination in Europe with what was then known as EBM (Electronic Body Music).

In 1990 the band and Flood once again returned to the studio with every intention of upping the ante even further. The resulting album 'Showtime' showed further evidence of the band's progression, combining their trademark energy with a growing musicality that added menacing depths to tracks such as 'Getting Closer' and 'Lightning Man'. The album also spawned a most improbable, though brilliantly effective remix of 'Fun To Be Had' by George Clinton, the visionary behind two of the greatest freak-funk bands ever - Parliament and Funkadelic.

Arguably the success of this collaboration acted as a spur for the band's next release, the EP 'As Is'. This saw McCarthy and Harris working with four different mixers to reveal the different musical aspects at work within band. Their collaborators included Jaz Coleman of Killing Joke, a recording artist whose musical aggression was even more noted than their own, and Alan Wilder, then of Depeche Mode, who applied his noted production skills to enhance the melodic potential within the band.

It was this potential that the band sought to develop on their 4th album, 'Ebbhead'. Released in 1991 the album was a full-blooded affair and with Alan Wilder joining Flood in the production hot seat it was perhaps no surprise to hear the rich musical instrumentation now firmly part of the band's armoury. Any suggestion though that the Ebb were somehow softening up were blown away by the full on pulverising assault of 'Godhead', an assault that had by now successfully overcome audiences in the US.

Though it appeared that the main external battles had been won, the band were arguably now having to battle with the internal tensions that naturally had arisen following a decade sustaining an intense level of shared creativity. Four years in the making 'Big Hit' finally made the light of day in 1995. The diverse and experimental nature of the band was still there, and in the lead-off single 'Kick It', the Ebb showed that they could still easily conjure up those moments that would batter the listener into submission yet make it a strangely rewarding process at the same time. Unfortunately, the band's decicion to update their sound with grunge-inspired guitars fails throughout most of the album, as the big rock-styled choruses proved incompatible with the band's signature electronics. Once ahead of their time, but now left behind, Nitzer Ebb found their last release headed straight to the cutout bins.

The cracks that appeared between McCarthy and Harris during the making 'Big Hit'--as well as longtime producer Flood's inattentiveness to the group's material--proved to be decisive and shortly after its release it became clear that another album would not be forthcoming. In fact it would take seven years before the band could bring themselves to talk to each other. Perhaps it was this enforced silence that encouraged critics to reassess the precocious impact and originality of the band, as a number of subsequent artists lined up to cite them as a major influence, or less honourably, simply exploiting the Ebb's musical template for their own individual gain. Whilst such a situation may be a cause of great annoyance to most bands, the Ebb maintain a healthy level of stoicism. As they say, ?That's the problem with being ahead of the game - the pioneers get the arrows and the settlers get the land.?

In the end of 2005 when the quantity of requests for new Nitzer Ebb live acts went beyond the limits McCarthy and Harris met to discuss the possibility of reunion. Since the beginning of 2006 they started to give concerts and since summer Nitzer Ebb are on reunion tour. A 2CD compilation of best tracks and a bunch of remixes "Body Of Work" was released in may and later, in july, a remixes album "Body Reworked" followed. For the tour Nitzer Ebb hired a new drummer - Kourtney Klein, mostly known for her work in CombiChrist. In august of 2006 it was officially confirmed that Nitzer Ebb are working on the new material. The recording actually started in March 2007. New record is going to be produced by british producer Jagz Kooner and should be issued, according to Douglas McCarthy, at spring 2008.

Ne+hh Live At The Markthalle