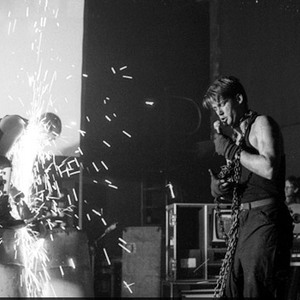 Two bands have used this name, an Australian and a Croatian. For the Croatian, please use the tag S.P.K. instead. SPK: Myspace Formed 1978 in Australia, was a 1980s industrial and noise music act once featuring Graeme Revell who later went on to compose soundtracks for film and television, most notably the incidental music for CSI: Crime Scene Investigation. Details - Personal; Operator - synthesisers, rhythms, treatments, vocals Wilkins - guitars, bass, tapes, vocals

SPK: Myspace
Formed 1978 in Australia, was a 1980s industrial and noise music act once featuring Graeme Revell who later went on to compose soundtracks for film and television, most notably the incidental music for CSI: Crime Scene Investigation.

-----The group was formed when Revell (aka Operator) met up with Neil Hill (aka Ne/H/il). They were both working at a psychiatric hospital when they became inspired by the manifesto of the German radical Marxist group known as the Sozialistisches Patientenkollektiv (SPK). The following words, inspired by the SPK manifesto, are used on one of the band's first recordings, Slogun (1979): "Kill, Kill, Kill for inner peace/ Bomb, Bomb, Bomb for mental health/ Therapy through violence!". Dominik Guerin (aka Tone Generator) joined in 1980, and was later to concentrate on the band's notorious visual content. Guerin and Revell recorded the first album, Information Overload Unit (1981), in a Vauxhall squat (during the Brixton riots in London) with the help of Revell's brother Ash (aka Mr.Clean) and Wilkins (guitar/bass). After the recording of SPK's second album, Leichenschrei ("The Scream of the Corpse")(1982), they were joined by Sinan Leong, who had initially auditioned for a planned SPK side-project, Dance Macabre. She and Revell were later to marry. In the first week of February 1984, just short of his 28th birthday, Neil Hill committed suicide two days before his wife Margaret Nikitenko died as a result of complications from anorexia.

Other musicians working with SPK included Danny Rumor and David Virgin, who were on the band's first recordings that were done in 1979, James Pinker and Karel van Bergan, who toured the U.S. in 1982 with Guerin and Revell, Brian Williams of Lustmord, John Murphy of forresta di ferro (better known as Kraang) and Derek Thompson, who later had a brief stint in The Cure and went on to record as Hoodlum Priest. Thompson claims that he left SPK when founder member Revell wanted to take the band in what Thompson perceived as a more commercial direction.----
(the above two paras from Wikipedia entry as edited by Dominik Guerin, ex-SPK)


The meaning of the SPK abbreviation is unclear and has changed: sometimes it was given as Surgical Penis Klinik, other times Sozialistisches PatientenKollektiv. The most notable works of SPK are the early works, Leichenschrei and Auto Da Fe. SPK's early music is best described as disturbing and psychologically disorienting, in line with their nihilistic, subversive philosophy.

The project ideal is to express the content of various psycho-pathalogical conditions, especially schizophrenia, manic - depressive psychosis, mental retardation and paranoia. Information Overload supersedes normal, rational thought structures, forcing deviation into less restrictive mental procedures of so-called 'mental illness'. SPK is trying to be a voice for those individuals condemned to the slow decay of mental hospitals and chemical / electro / surgical therapy, without fetishising them into blatant entertainment product. 'SONIC FOR MANICS' aims to be a vehicle for sharing mental experiences through sound.

"The mean I.Q. of 'fighters' was 91; for 'non-fighters' 78. But the mean I.Q. of the whole group of combat soldiers was 85, i. e. 15 points below the average. In other words, the less inteligent men are those into combat & the more intelligent among them, though they are still well below average."

Almost 50% of psychoneurotic soldiers were in the army for over 18 mths, and 22% became NCO's of some sort. In fact, psychoneurotics were 50% more likely to be promoted to NCO than normal privates."

'Fighters' were less ectomorphic and more meadmorphic than 'non-fighters', on average an inch taller and 8lbs heavier. The first sexual experience occured a year later for fighters, (15yrs 8mths against 14yrs 3mths). The fighter has faster reflexes and performs much better in pencil maze and mirror drawing tests. Very few first-born children, being by and large more anxious."

"We have begun working on the second album : Leichenschrei, due for release from the UK in April, 82. This will be the final produkt, as we originally intended. However, there will be a movement into video and film, beginning with L'Etat Haemophiliaque (Internal Bleeding) which is in progress and will have its first screening in Australia later this year. SPK will then specialise in soundtrack, a medium we have always had a strong sympathy with.

In response to the considerable interest shown in our projekt so far, we have decided to devote a Dokument to an explanation of some of the areas of research into sound and visuals which we have used. Subliminal content in lyriks and voice tapes occupies much of our attention. However it requires feedback from others in order to evaluate their effectiveness. That is why we always encourage correspondence, even though various members of the group prefer to remain anonymous (as far as possible). In addition, we try to provide some interesting information on experiments into mental phenomena, and to dispel some of the boring myths about infra/ultra-sonics. "

"We have often been asked the reason for apparently limiting ourselves to the mental sphere. The answer is that we feel the need to intensify interest in the SPECIFIC locus of consent to be repressed in the individual. We therefore claim to be "politikal", but not in the accepted sense of the term. "

In 1982 SPK will abandon its earlier practice of limited publik appearances, with scheduled live assaults in Japan, Europe and Amerika.

INFRA / ULTRA SOUND.
Sound sources at frequencies outside the nomlal limits of human auditory response are the subject of much popular mythology. First research in depth by the US Military in the 50s, they are now used primarily in warfare and medical applications. SPK has been using certain kinds of low and high frequency generators: for some time in live assaults. Here we present some facts about such signals.
Infrasound, or frequencies below 20 Hz, is commonly the byproduct of transport, air heating/cooling systems, compressors, transformers, and vibration/acceleration phenomena. But in order to experimentally generate these frequencies at adequate levels for hearing (or rather for experiencing), requires immense power and large and specialized equipment (e.g. piston-driven speakers). The loudness factor necessary is in excess even of the loudest aero-turbine at some frequencies. However, once generated, annoyance thresholds increase very fast as we take the oscillator or noise generator down through the range. Once the tactile sensations become evident there is a dramatic leap in the response curve (i.e. below 10 Hz). At 20 Hz it requires 85.2 dB for the signal to be perceived, rising to 92.1 dB at 15 Hz, 99.5 at 10 Hz, 111.1 at 5 Hz, and a massive 121.4 dB at 2 Hz.
The following subjective responses were experimentally gained by subjecting test subjects to whole-body fields.
2 - 5 Hz (137 dB) - difficulty in speaking/voice modulation, chest wall vibration, swaying sensations, lethargy, drowsiness, headaches and fatigue.
5 - 15 Hz - middle ear pain, difficulty speaking/voice modulation, severe chest wall vibration, severe abdomen vibration and nausea, falling sensation, lack of concentration/drowsiness, severe fatigue/headache.
15 - 20 Hz - severe middle-ear pain, respiratory difficulty, severe chest wall vibration, gagging sensations.

Live performances included truly disturbing video backing (some of which was issued in two videos, "<Despair>" and "Human Postmortem: Two Autopsy Films"), trangressive performances with animal carcasses and other usually successful attempts to make the audience very uncomfortable. The group issued radical manifestos, such as "The Post-Industrial Strategy", which appeared in RE/Search's Industrial Culture Handbook.

Later releases were more synth pop-oriented than industrial. Notably, the 12" Metal Dance/Will to Power incorporated industrial percussion into a dark synthpop song; their Auto-Da-Fe includes other early fusions of synth and industrial. With 1984's Machine Age Voodoo, the band furthered their "Metal Dance" style (notably on High Tension and Junk Funk, titled Machine Age Voodoo in the US), but also proved surprisingly capable of writing poppier material like With Love From China. As a whole, the album is far from the band's calculatedly disturbing past, but it anticipated the Wax Trax/Nettwerk dance-industrial sound of the late 1980s. Machine Age Voodoo remains an under appreciated synth/dance album that has only recently appeared on CD.

Later the group moved into electronic orchestral work, with Zamia Lehmanni - Songs of Byzantine Flowers actually being very beautiful music, highlighted by In Flagrante Delicto, which would be used in the film Dead Calm, thereby marking the beginning of Revell's soundtrack composing career.

Following the mediocre Off The Deep End 12" in 1986 (although the B-side, Kambuja, is a moving political track about Cambodia), Revell teamed up with another singer, Katrina Hayes, for Gold And Poison, the first side of which featured synth-dance tracks (notably the excellent, moody single Breathless, and the dumb but catchy Mouth to Mouth), the B-side remixed a few tracks from Zamia Lehmanni and added a great anti-nuclear track, White Island.

Graeme Revell has now all but expunged SPK from his CV; he barely acknowledges his musical past in interviews.