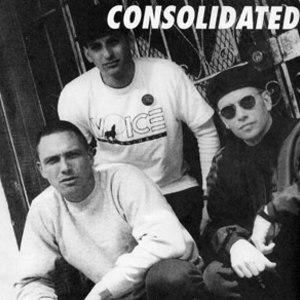 Consolidated was an American radical recording and performing collective, formed in in San Francisco in 1988. They were distinguished by left-leaning political activism and politically radical lyrics, as well as their innovative sonic collages which blended industrial and hip-hop styles. Its members--Adam Sherburne and Mark Pistel, --had been members of synthpop/dance outfit Until December. Philip Steir had drummed in the funk/rock group Shy Hands.

The band released their self-titled debut EP in 1989 (they were on Nettwerk in North America and, somewhat oddly, Zoth Ommog in Europe). Centered on two mixes of the industrial-rap "Consolidated!", the EP is a statement of purpose, a foreshadowing of the bands' ideas and politics. While embracing rap and sampling, its jerky rhythms aren't far from late-period Devo.

Their first full-length record, The Myth of Rock, is also aggressively political, but its complex and intricate instrumental backing--recalling, at once, Tackhead, Public Enemy, late-80s sampledelica, and the brutal industrial of Test Dept.--would impress even the most conservative listeners. Sherburne does more speaking on the record than rapping or singing, but his anger and conviction come through on every track. Not as heavy-handed as it could be, this is an underrated dance record.

Play More Music returns a bit to the sonic aggression of Myth of Rock. The record, like Friendly Fascism, features spoken-work snippets from the group's concerts--the band would end shows by having a dialogue with their audience, which (the records demonstrate) sometimes became contentious. "Tool and Die", an pro-gun control song, is one of the band's most powerful (look for the MBM remix on the CD single), and "You Suck"--which strongly resembles Lords of Acid--remains a club favourite.

Consolidated signed to a major label, London/Polygram Records, and released Business of Punishment (their tribulations with the record industry are recalled in on of the record's standout tracks, "Dog & Pony Show"). The band mostly abandoned their rap and industrial influences in favor of a guitar-oriented, grunge sound, much to the album's detriment. Only the pro-choice anthem, "Butyric Acid", retains the punch and energy of earlier efforts.

London/Polygram dropped the band, Pistel (who had become an in-demand producer and remixer) left soon afterwards, but Consolidated continued recording. A recently released compilation, More Music Please: The Best of Consolidated, 1988-1993, contains most of the singles from their Nettwerk years and is an excellent introduction to the group.

The End Of Meaning

The Myth Of Rock