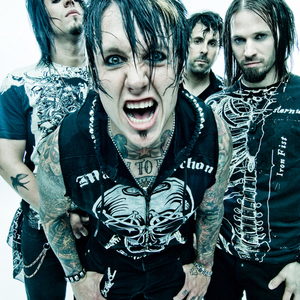 Papa Roach is a nu metal rock band from Vacaville, California, United States. Formed in 1993, it consists of Jacoby Shaddix (vocals), Jerry Horton (guitar), Tobin Esperance (bass), and Tony Palermo (drums). Tony, previously of Unwritten Law, joined the band after the departure of one of the band's founding members, Dave Buckner. Papa Roach has sold more than 10 million album copies worldwide, and are known for their hits "Last Resort", "Scars", "Forever", and "Lifeline", among others.

They had mostly regional success until their breakthrough with the hit single "Last Resort" from their first major label album, Infest. The band's latest album titled Metamorphosis was released March 24th, 2009, with the singles "Lifeline" and "Hollywood Whore" available at digital retailers. They released a live album w/ 5 new tracks August 31, 2010 named "Time for Annihilation...On the Record and On the Road", with the first singles being "Kick In The Teeth" and "No Matter What".

The Still Swinging Songfacts reports that Papa Roach's eighth studio album, The Connection, was recorded at the band's hometown studio, The Red House in Sacramento, California. The long player was produced by James Michael (Sixx:A.M., Halestorm) and John Feldmann (Panic at the Disco, The Used, Escape the Fate). A release date for the album is planned on October 2, 2012.

Who Do You Trust?