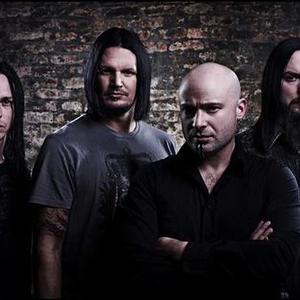 1) Disturbed was formed in 1996 when musicians Dan Donegan, Steve Kmak, and Mike Wengren hired singer David Draiman in Chicago, Illinois. They have sold over 11 million albums worldwide, and released four consecutive #1 debuts a feat achieved by only two other rock bands in the history of the chart: Metallica and Dave Matthews Band. Originally classified as a nu metal band, Disturbed is now regarded by some music critics as hard rock or heavy metal, although others now regard them as nu metal. However, the band's genre is still being debated. When asked about die-hard metal fans not finding Disturbed heavy enough, frontman David Draiman stated:

"We probably have too much melody going on or we're not quite as turbulent or caustic. While I really love that type of music, it's not what we try to do. If we have to place things in context, we're more hard rock than heavy metal these days."

Early Days, The Sickness
In their early years, Disturbed started recording several demos and played live shows. Not long after, in 2000, the band released their debut album, titled The Sickness, which launched the band into stardom. The song Down With the Sickness became extremely popular and was later used in many film soundtracks. Soon after the release of "The Sickness", Disturbed released a revamped cover version of "Stone Cold" Steve Austin's theme music for WWF called "Glass Shatters". Disturbed headlined the Ozzfest tour in 2001 alongside Black Sabbath, Marilyn Manson, Slipknot, Papa Roach, Linkin Park, Black Label Society, and Crazy Town. Afterward, the band started their own tour, called Music as a Weapon. The bands Adema, Drowning Pool, Stereomud, and Systematic were featured on the tour alongside Disturbed.

Before joining Marilyn Manson's 2001 European tour, Disturbed's bassist Steve "Fuzz" Kmak was unable to play with the band due to a shattered ankle. Fuzz injured his ankle by falling out of a fire escape outside Disturbed's rehearsal hall in Chicago a few days before Christmas. He took the fire escape to exit the building while the elevator was being used to move their equipment downstairs. After a successful operation, doctors highly recommended that he skip the tour to avoid more severe damage to his foot. Kmak did perform with the band on January 11th and 12th of 2001 in Chicago however. A bass player named Marty O'Brian was recruited and filled Fuzz's spot until Fuzz was able to play again. On June 4, 2002, Disturbed released a "documentary" about the band titled M.O.L., which showed some of the bands more personal moments in the studio and during tours.


Believe
In September 2002, Disturbed released their second studio album titled Believe, which debuted at #1. The songs Prayer, Liberate and Remember all became singles and many fans were impressed with the new album, despite it being less aggressive than their debut. The music video for "Prayer" was pulled from most TV stations due to the similarities it had with the September 11, 2001 attacks. Disturbed's front man, David Draiman, recorded the vocals for Forsaken, a track written and produced by Jonathan Davis of the band Korn for the Queen of the Damned soundtrack. In 2003, the band once again participated in the Ozzfest tour and started another one of their own tours named Music as a Weapon II. The bands Chevelle, Taproot, and Unloco toured with them.

In early 2003, after Disturbed had finished the Music as a Weapon II tour, the band experienced the departure of bassist Fuzz, who was excused from the group due to "personal differences." He was replaced with Matt Konopinski very briefly, and then John Moyer, who is now the current bass player.

Disturbed supplied the song "Stricken" for WWE's New Year's Revolution 2006. In April 2006, the band completed an Australian tour supporting Korn and sharing the tour with 10 Years and Hatebreed. In mid 2006, a European tour was scheduled but had been moved twice due to David Draiman having troubles with his voice.

In late 2006, Draiman underwent surgery for a deviated septum which affected his voice. It was successful, and ever since then, Draiman has limited his drinking on the road. Disturbed headlined Ozzfest 2006 along with Ozzy Osbourne, System of a Down, Dragon Force, Avenged Sevenfold, Lacuna Coil, and Hatebreed. The band also went on the European tour that had been previously moved twice earlier in 2006. Disturbed headlined another one of their own tours named Music as a Weapon III; the bands Flyleaf, Stone Sour, and Nonpoint toured with them.

Dave Draiman and RIAA
Draiman became involved in the music file sharing controversy by publicly speaking out against the RIAA's lawsuits against filesharing individuals, despite the fact his record label is a member of the RIAA.

"This is not rocket science. Instead of spending all this money litigating against kids who are the people they're trying to sell things to in the first place, they have to learn how to effectively use the Internet. For the artists, my ass...I didn't ask them to protect me, and I don't want their protection." - Draiman.

Draiman told NYRock:
"I'm Very positive about the internet, Napster. I think it's a tremendous tool for reaching many more people than we ever could without it. When you release music you want it to be heard by people. Artists really want to have their music heard. They want to have their creation heard by people. Nothing is going to do that better than Napster. I can't tell you how many kids have come up to me and said, 'I downloaded a couple of tunes off Napster and I went out and bought the album.' Or they say, 'I want to come see you play.' I don't really make money off of record sales anyway."

Indestructible to Present (2007 - 2009)
Indestructible was released in the United States on June 3, 2008 and in Australia on June 7, 2008 and became the band's third consecutive number-one debut on the Billboard 200. A special "Internet Only" limited edition of the album that includes the B-side track "Run", a making-of DVD with instructional videos, wrap-around poster, VIP laminate, access to special Disturbed events, and a special website with exclusive video, rare audio and more was also released. The band toured in support of the "Mayhem Festival" alongside Slipknot, DragonForce, and Mastodon during summer of 2008. Disturbed also completed a tour of Australia and New Zealand through August and September 2008.

The band began their Music as a Weapon IV tour in March 2009 and it ended in late May. The tour, also dubbed a "festival", featured the bands Killswitch Engage, Lacuna Coil, and Chimaira on the main stage.

In an earlier interview, David Draiman briefly talked about the band's fifth studio album, stating that the album will be as dark as their previous album, Indestructible, if not darker. Song-writing for the fifth studio album began in late 2009. In an earlier interview with Mike Wengren and John Moyer, it was stated that, judging by Draiman's feelings on the last few years of his life, that Disturbed's new album will be aggressive, angry, and "hard-hitting", but will be similar musically to their album Believe. Wengren also said that the new album may be released in the spring or summer of 2010. Additionally, Draiman has confirmed that a DVD is in the works. A countdown clock appeared on the band's website, which ended on January 12, 2010 at 5:00 p.m. EST, and a trailer for the upcoming DVD, titled Decade of Disturbed, was revealed.

In a July 2009 interview with FaceCulture, Draiman stated that the upcoming DVD will be "chronicling the past decade of Disturbed's existence. It's meant to show our growth over the course of the decade." He also talked more about the upcoming fifth album: "A couple of them [song riffs] that Danny has come up with are really amazing. But they're just little pieces...it's not even in two-three part progression [yet]."

On March 23, 2010, the band will release a reissue of their debut album, The Sickness, with the B-side tracks "God of the Mind" and "A Welcome Burden", as well as updated artwork. It will also be available for the first time in vinyl format.

On February 8, 2010, it was announced that the band had entered the studio in Chicago, Illinois to begin recording their fifth album, tentatively set for a summer 2010 release. Guitarist Dan Donegan stated that the band has around 15 to 18 songs for the new album.

2) Late 80's Thrash band who released the album Disturbing the Peace in 1988.

"Cool crossover/thrash metal. The music takes off quite a few times, especially when it comes up with contrasting mixtures, like "Comatose", which blends heavy doomy riffage with brutal death-tinged outbursts; there are also some undeveloped, but intriguing attempts at more technical thrash (the instrumental "Brain Deth", the sophisticated technical "Productive Intercourse Serial Killer"), spiced with some jolly, rock'n roll hooks. The shorter numbers are pure unbridled hardcore ("Kill 'Em"), but here come the laid-back, soft moments ("Bought & Sold", "Die Die Die"), and things are well balanced. "Evil Sensations" is a pleasant surprise near the end, being energetic thrash/crossover, with a nice technical twist, followed by the melodic, but interesting instrumental "Astronomically", leaving very good impression, partially ruined by the aggressive hardcore closer "What The Fuck". The band disliked the popularity that a novelty song like WTF produced, and it WAS a fan favorite but largely dropped from their live set in the 1990s. Due in part to the lyrics and how the band felt about the song. The band was formed in Minneapolis, MN but toured extensively all over, including the stomping grounds of the later Disturbed; Chicago! They played Jack Koshick's Milwaukee MetalFest in it's earliest days and supported Sepultura and Pestilence on tour, as well as Death and Sadus, and local legends IMPALER. Earl passed away in 2008, he is missed by all who knew him, and his MySpace page remains testament.

If I Ever Lose My Faith In You (CDS)

Inside The Fire CD2

Inside The Fire CD1

Are You Ready (CDS)